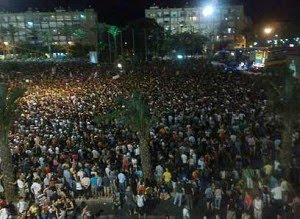 Over the weekend thousands turned out to honor those killed and wounded during the prior week's terror attack at a gay youth center in Tel Aviv - even though threats had been made that terror attacks might be made against those attending the rally for the shooting victims. As with Christian fanatics and Islamic fundamentalist extremists, ultra conservative Jewish groups have turned religion into something evil and motivated solely by fear and hate. I am happy to see that decent people refused to be intimidated by the anti-gay hate merchants. Here are some highlights from Haaretz.com:
*
One week after a gunman entered a center for gay and lesbian youth and opened fire, killing two people and wounding 12, tens of thousands of people gathered in Tel Aviv's Rabin Square on Saturday to commemorate the victims and show solidarity. The rally was to be addressed by Tel Aviv Mayor Ron Huldai, President Shimon Peres and Education Minister Gideon Sa'ar, as well as family members of the victims and members of Israel's gay community.
*
The rally was preceded by a number of threats against the gay community. Earlier Saturday, a soldier in the Israel Defense Forces' Nahal Haredi unit was arrested on suspicion that he had threatened rally organizers on an online forum. While in custody, the soldier confessed to making the threats. Meanwhile, operators of transportation to the Tel Aviv rally received telephone threats from an anonymous caller who warned that grenades will be hurled at attendants of the rally.
*
A similar threat was received by organizers of transportation from Haifa. According to Gal Zberger, who organized a Peace Now bus to take demonstrators from Haifa to Tel Aviv, "I got a phone call from a number I didn't recognize. He asked for details regarding the bus. I gave him the details and asked for his name. He said 'the one with the grenade.' I asked what he meant, and he said 'today you will get hit with grenades, not just guns.'"
*
I believe that there is a God or higher being - what must he/she/it think of the horrors done in the name of God?
Posted by Michael-in-Norfolk at Monday, August 10, 2009