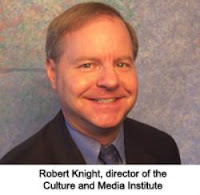 I have posted before on the anti-gay obsessions of Robert Knight, former director of Concerned Women for America's Culture and Family Institute and now the senior writer/correspondent for Coral Ridge Ministries, with whom I have had numerous e-mail debates in the past (Yes, Robert, I DO still have all your e-mails). In many ways it is fitting that Knight is now a tool of the ever dishonest Coral Ridge Ministries - which sold "ex-gay Michael Johnston's books and videos even though it was known that Johnston had experienced a "moral fall" and was anything but cured of homosexuality. In my personal opinion, Mr. Knight is an example of the most shrill, self-hating closet case who transfers his own self-hatred to gays who have come to terms with their sexual orientation. Here are highlights from Knight's latest screed posted at Concerned Women for America and WingNutDaily (NOTE: Knight totally ignores the latest APA report on "change" therapies and continues to lie about sexual orientation being a choice):
*
Obama has promised the sky to homosexual activists and the abortion lobby and has moved quickly toward that end. On July 16, the Senate voted for a "hate crimes" bill that will lay the foundation for crushing freedom of speech, religion and association with regard to sexual morality. The health care scheme is rife with opportunities for exotic entitlements like tax-funded abortion and even sex-change operations. A homosexual activist, Kevin Jennings, whose group promotes books to kids that contain graphic accounts of adults seducing teens, has been appointed head of the Department of Education's "safe schools" program, which is like naming Ozzy Osbourne to be drug czar. And Obama says he wants to lift the military ban on open homosexuality and overturn the Defense of Marriage Act.
*
On Aug. 5, the GOP's Maine kleptocrats, Susan Collins and Olympia Snowe, joined Oregon Sen. Jeff Merkley and longtime sponsor Ted Kennedy in reintroducing the Employment Non-Discrimination Act (ENDA), which we'll call the "gay quota bill" for short. ENDA is profoundly dangerous. It turns private sin into a public right and brings the force of government against morality itself.
*
[S]o-called same-sex "marriage" laws are absurd and treacherous. Forcing citizens to accept a counterfeit as the real thing is an act of despotism. ENDA adds not only "sexual orientation" but "gender identity" to federal workplace anti-discrimination law. Thus, it takes an ax to the idea that sexual behavior has a natural normalcy or any relation to morality. It falsely equates a changeable condition (sexual desire) with race and ethnicity. Worse, it turns traditional values into a form of bigotry punishable under the law.
*
Our very survival is at stake, not just our economic well-being.
*
Nothing like striving to create hate against LGBT Americans. Also, if one reads the whole screed, Knight indulges in his usual rewriting of history and outdated "experts." In fact, based on Knight's bogus tactics and arguments, I'm surprised that he's not also arguing that black are mentally inferior to whites. He's a bigot of the first order. P.S. Robert, in my opinion I still think that what you really need is to hire yourself a hot male escort, experience the gay sex you secretly lust for and leave the rest of us gays alone.
Posted by Michael-in-Norfolk at Thursday, August 13, 2009