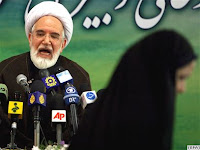 I always find it ironic that those who claim to be the protectors of religious purity - regardless of the faith involved - are generally the ones that inflict the most heinous treatment on those who challenge their authority or espouse a different belief system (e.g., the Catholic Church's Inquisition which tortured and executed "heretics"). Recent events in Iran confirm this pattern as charges of rapes and torture of detained protesters by the thugs of Ahmadinejad and Khamenei have come to light. Now, in an effort to secure redress - and expose Ahmadinejad and Khamenei for their true colors - defeated presidential candidate Mehdi Karroubi (pictured above left) has written to Akbar Hashemi-Rafsanjani, head of the Assembly of Experts, demanding an investigation. Here are some highlights from Tehran Bureau:
*
Defeated presidential candidate Mehdi Karroubi called on the Assembly of Experts to investigate the sexual assault of a number of young men and women arrested in the post-election unrest. In a letter to the head of the Assembly, Akbar Hashemi-Rafsanjani, Karroubi said,” Some of the detainees of the [post-election] unrest claim that the detained girls have been sexually assaulted with such brutality that they have all sustained intense vaginal tearing.”
*
“The young men in detention were also sexually assaulted in a manner that some are now suffering from depression and other physical and psychological problems and are incapable of even leaving their homes.”
*
Karroubi, the Secretary-General of the National Confidence party said, “The people who informed me about these events hold sensitive positions in the country… these officials told me that the things that happened in the detention centers [are so deplorable] that even if one count is true, it would be a tragedy for the Islamic Republic… and it would whitewash the sins of many dictatorships including that of the deposed shah.”
*
“Given the importance of the issue, it is expected that an impartial and transparent committee be appointed by the head of the Assembly of Experts to investigate the issue until results are obtained and so that this will be a lesson for the future and hooligans will no longer dare to cause the Imam [Khomeini], the establishment and the Islamic Republic to lose face.” According to Mehdi Karroubi’s son Hossein, the veteran politician’s son had written the letter 10 days ago and due to the silence of Rafsanjani had been forced to make the letter public.
*
I suspect that the rapes and torture and murder of detained protesters happened - and that it all was directed by Khamenei and Ahmadinejad. Nothing is more dangerous and lawless than religion fused with politics.
Posted by Michael-in-Norfolk at Monday, August 10, 2009