A Visit to Falling Water 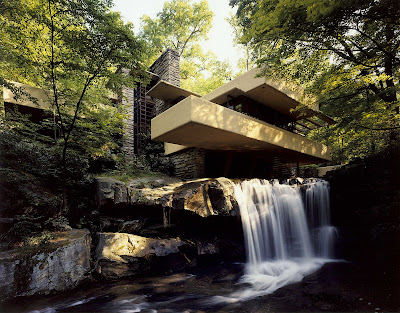 Part of this weekend's whirlwind trip so far included a trip to Fallingwater,perhaps one of Frank Lloyd Wright's most famous homes that he designed for the wealthy Kaufman family of Pittsburgh, Pennsylvania. The house is amazing in many ways and the uniqueness of the design and the way in which the home is incorporated into the rock out cropping and waterfall is remarkable. I was fascinated both by the house itself and Wright's design. I was also intrigued by the Kaufman's son, Edgar J. Kaufman, Jr., who played a role in the home's creation.
*
Much like once was the case when one visited Jefferson's Monticello when Sallie Hemmings went unmentioned, the same occurred during our tour. While our tour guide was a sweet young woman who described the younger Kaufman's accomplishments - it was he who donated the home to the Western Pennsylvania Conservancy - one part of the true history was omitted: the younger Kaufman was gay. The official history given out in the tour is that "Edgar, Jr., never married" as if being gay is still something shameful. It would be nice if the truth were told and perhaps a few minds and hearts could be opened to a better appreciation of the fact that being gay is something natural and not in need of being hidden. Here's some brief biographical facts on Edgar J. Kaufman, Jr.:
*
Edgar Kaufmann, Jr. (1910 – July 31, 1989) was an American architect, lecturer, and author. He was the son of Edgar J. Kaufmann, a wealthy Pittsburgh businessman and philanthropist who owned Kaufmann's department store. Edgar Jr. attended the School for Arts and Crafts at the Austrian Museum of Applied Art in Vienna in the late 1920s, studied painting and typography for three years with Victor Hammer in Florence, and was an apprentice architect at Frank Lloyd Wright's Taliesin Foundation from 1933 to 1934. He strongly supported his father's decision to commission Fallingwater by Wright in 1936.
*
In 1940, Edgar wrote to Alfred Barr of the Museum of Modern Art, proposing the Organic Design in Home Furnishings Competition, won by Charles Eames and Eero Saarinen. He served in the US military during World War II. Afterwards, he was Director of the Industrial Design Department at the Museum of Modern Art. Edgar's greatest accomplishment during his tenure was the Good Design program of 1950 to 1955, in which the museum joined forces with the Merchandise Mart in Chicago, promoting good design in household objects and furnishings.
After his father’s death in 1955, Edgar Jr. inherited Fallingwater and continued to use it as a mountain retreat until 1963. Then, following his father’s wishes, he entrusted it and several hundred acres of land to Western Pennsylvania Conservancy as a conservation in memory of his parents.
*
From 1963 to 1986, Edgar was an Adjunct Professor of Architecture and Art History at Columbia University. He authored several books on Wright architecture and modern design, and was a contributor to Encyclopædia Britannica. Following his death in 1989, Edgar was entombed alongside the remains of his parents in the family mausoleum on the grounds of Fallingwater.
Posted by Michael-in-Norfolk at Sunday, August 09, 2009

Everyone who visits Fallingwater starts at the Visitor Center, which contains a cafe and museum shop. This open-air pod structure was designed by Paul Mayen, Edgar Kaufmann, jr.'s partner of 35 years. They met at Columbia University when they were in their early twenties. They shared an apartment in NYC and later a retreat in Hydra, Greece. Sitting unceremoniously atop a coffee table in Fallingwater's living room is a red cubist sculpture, also designed by Mayen, an industrial designer. After Edgar jr.'s death, Paul Mayen auctioned Edgar's vast collection of modern paintings in the 1990s; the sale netted $98 million. Thereafter Mayen continued Edgar's philanthropy, generously supporting the conservancy to which Fallingwater is entrusted.

I have just returned from a tour of Fallingwater. Our tour guide freely referred to Edgar Jr. having a life partner, Paul Mayen. I don't know if this is done on a guide-by-guide basis or if there has been an overall change since your post three years ago.

Nancy, I do not know if there has been a change in policy or not. It would certainly be nice if the staff no longer felt that it was not appropriate to mention Paul Mayen.

I visited Falling Water today 10/26/2014, and the tour guide referred to the son as a bachelor. When I asked, "did that mean he was gay?" he replied, "he ws a bachelor and he was gay." Now I come to read that they were in a relationship for 36 years. So homophobic still, to deny that 36 years is a relationship...

Yes, it is sad that even now with same sex marriage legal in Pennsylvania that a 36 year relationship is treated as unmentionable.

I visited falling water today and the tour guide mentioned that Edgar Jr. had a life partner named Paul Mayen. Later on the tour we saw two frogs sitting out on the patio, the tout guide said that last year they had a large frog they had lovingly named Frog Lloyd Wright. The groundskeeper said that they should name these two new frogs after Edgar Sr. and his wife, our tour guide then said that both the frogs were male by their color and they should be named Edgar and Paul. Its nice to know that the homophobia us slowly but surely melting away.

We were there this weekend and no mention of his homosexuality or life partner. I suspected and looked it up. Wish they felt they could be more open about it.

Our guide this week mentioned his life partner!

Our guide straight up said he was gay and his partner of 30 something years was Paul Mayen, who designed the visitor center. She explained that it's the reason it didn't stay in the family, that he had no children.That was yesterday, August 1st, 2015. Very good tour. Maybe they look at the group and gauge whether or not they should omit his sexual preference as part of the tour. It also could be some tour guides studied more than others. Our was fabulous. She was very nice and funny.

I am glad that the tour guides are finally talking about the true story. Thanks for sharing.

Visited Today August 9, 2016 and our tour guide said that Edger Jr was Gay, at Columbia University he met the Love of his life and partner of 35 years Paul Mayen. It was said very matter of fact.

was there last week (8/22/2016). They do mention jr's partner by name, and talk about some of the things they designed/did. i will recommend to you though: the tour is very antiseptic of many of the facts/lifestyle/personal angles of the Kaufmanns. One comes away from the tour feeling like Fallingwater is heaven, and those who lived there were god-like. It's not until one researches the Kaufmanns does the discovery of their personal life and their (including Wright's) personalities throw shade on the building. Fallingwater was an emotional tomb for Liliane; a social phallic symbol for Edgar Sr; and a mix of each for Edgar jr. It amazes me the aesthetic beauty that is born out of such human imperfection.

Just visited Fallingwater yesterday March 11, 2017. The fulfillment of a bucketlist item that i've been carrying around for 35 years. For me, the visit was not only awe inspiring, (I am a lover of architecture from my youth) I was also reminded once again what wonderful creative power lies in the minds of the truly God gifted. The Art and Architecture of the place deserves to be preserved and shared with humanity for no other reason than to be a perrenial reminder to all, that the beauty of Nature is universally appreciated regardless of ones socioeconomic or cultural position. It seems to me that although the men Frank Lloyd Wright and EJ Kauffman were actors in the play, the creator of the play is far too often overlooked. Without God graciously giving the architect such a brilliant ability at design and the owner such a brilliant business mind to make money and then putting the two of them together, the world would never have known the unparalleled and awesome beauty of Fallingwater. I think that we too often allow ourselves to be distracted with the marginal and periferal and by doing so, we miss the main event. I was deeply moved by the experience and highly recommend the visit to all who can work it in to their busy lives - Stuart V

I was there today, March 31, 2017 & there was no mention that Kaufman Jr. was gay. He was described as unmarried & childless, which is why the home & grounds were not passed on to heirs. I assumed this meant he was gay & am now saddened to see that his 30+ year relationship still sometimes gets no mention. I'm glad to read that this isn't the case with all tour guides though.

As a former employee in the '90's, it was our understanding that when Edgar jr. was still alive and influenced the content material given to the tour guides, he did not wish to focus on this in the tour. Similar to the other 'family secrets' that followed the family around and was common knowledge to the locals and those in the Kaufmann circle. It was out of respect for Edgar jr.'s wishes that this information not be volunteered. Each tour guide had to handle this knowledge and, as you might imagine, only address it if questioned. I can't speak for the tour guide training within the past 15+ years, and given the warmer climate of acceptance in today's society, perhaps employees are encouraged to discuss this more openly and not in a way to treat it like a 'dirty secret'.