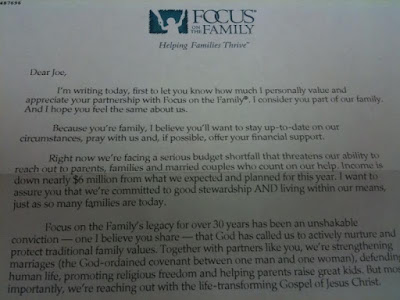 Last November I did a post on the financial hard times being experienced by Daddy Dobson's Uber-Christian group, Focus on the Family ("FOF"). Indeed, shortly before the holidays last year FOF announced major layoffs - for the third year in a row. Apparently, the market for Daddy Dobson's type of hate, intolerance and prejudice has not improved and now the organization is whining and groveling for contributions to deal with a $6,000,000 budget short fall as set forth in a recent letter (a copy is above). Given the fact that Daddy D claims to have a direct line to God, it's more than a little bit strange that God is not providing for FOF financial needs. Or could it be that God is giving FOF precisely what it deserves for turning the Gospel message into an instrument of hate?
*
In addition to disseminating lies and hatred towards LGBT Americans and perpetuating the myth that sexual orientation can be changed by sponsoring the bogus "Love Won Out" circus and selling books with titles like "You Don't Have to be Gay," Daddy D's crowd also among other things promotes (a) the "Christian nation" myth, (b) the teaching of creationism instead of real science, and (c) anti-immigrant propaganda. In short, FOF is a pretty nasty piece of work and nothing would serve the national interest than to see it and "family values" and professional Christian organizations go out of business.
Posted by Michael-in-Norfolk at Monday, August 10, 2009