GOP Needs to Pay a Price for the Town Hall Rage 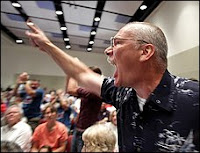 The deranged lunacy of the GOP and Faux News incited protesters at Congressional Democrat "town hall" meetings on health care reform is taking on an increasingly frightening character and I suspect that it is only a matter of time before violence of some type ensues. The amount of hatred that these protesters - whether GOP operatives or easily manipulated idiots - are exhibiting clearly shows the true nature of the GOP base. The same base that embraced Bible Spice Palin back during the 2008 campaign. The are racists, hate immigrants - even though most are obviously descendants of immigrants themselves - and likely consider themselves conservatives and conservative Christians. The video clip below is a good example and these words speak volumes: "Send [illegal immigrants] home with a bullet in the head the second time":

David Broder has a column that looks at this increasingly vile hatred campaign in today's Washington Post that illustrates how and why the GOP leadership - and that means elected officials, not Rush Limbaugh and talking heads at Faux News - need to do if in the long term the Party does not want to lose all respect in the minds of the majority of voters. Here are some highlights:
*
Watching the muscular tactics being used in congressional town meetings by some opponents of health-care reform, I keep thinking somebody should remind the Republican leaders who are reveling in the scenes about Bruce Alger.
*
Alger was the first Republican congressman elected from Texas in the modern era, winning a Dallas district in 1954. In 1960, just a few days before the presidential election, he was part of a crowd of several hundred people who surrounded Lyndon B. Johnson, the Democratic vice presidential nominee, and his wife, Lady Bird, when they arrived for a luncheon at the Adolphus Hotel in Dallas.
*
Many of the demonstrators carried signs labeling the Texas senator a "Judas." Alger's placard read: "LBJ Sold Out to Yankee Socialists." As I later wrote, the Johnsons "were engulfed by the crowd, and for more than half an hour, were reviled and jostled as they slowly made their way across the lobby.
*
The backlash was instant and powerful. As conservative columnists Rowland Evans and Robert Novak later wrote in their book about Johnson, the scene in the Adolphus "outraged thousands of Texans and Southerners. Sen. Richard Russell of Georgia, who had not campaigned for his party's national ticket since 1944, telephoned Johnson that evening to offer his services." The Johnson biographers concluded that while no one could prove the case, it is "a credible hypothesis" that the Adolphus incident swung Texas and perhaps other closely contested Southern states to the Democrats. In 1964, when Johnson headed the Democratic ticket, he got even: His coattails swept Alger out of office.
*
[N]ot all the GOP leaders have gotten the message. Democratic Rep. Debbie Wasserman Schultz, who represents a heavily Jewish district in Florida, phoned me to complain that top House Republicans have not publicly repudiated Rush Limbaugh for his statements likening Obama's health policies to those of the Nazis. Much improvement is needed in the health-care bills, but I think these angry opponents are playing with fire.
*
Other stories are demonstrating that violence may soon break loose. In an Associated Press story, it is reported that the Secret Service is investigating a man who authorities said held a sign reading "Death to Obama" outside a town hall meeting on health-care reform in western Maryland. The sign also read, "Death to Michelle and her two stupid kids," referring to the first name of President Barack Obama's wife, said Washington County Sheriff's Capt. Peter Lazich. Indeed, as Media Matters has reported, some of the wingnuts are now spreading the untruth of an alleged conspiracy theory that the Obama administration is planning to "round up American citizens" into "internment camps." Among those spreading this lie are - surprise, surprise - Michael Savage and Janet Folger Porter who has apparently paused for a moment from her quest to demonize and marginalize LGBT Americans.
*
I truly do not know what is worse: that people are vile enough to spread such lies or that people are so stupid and ignorant that they believe this manure.
Posted by Michael-in-Norfolk at Thursday, August 13, 2009