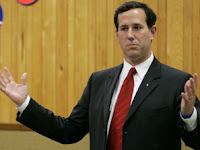 As if the Republican Party did not already have enough loons with presidential ambitions - e.g., Sarah "Bible Spice" Palin, Mike "I'm a Whack Job" Huckabee - now Rick "man on dog" Santorum appears to be joining the parade of would be candidates for the Iowa primary in 2012. It's ironic that Santorum, who could not even hang on to his Senate seat because Pennsylvanians came to recognize he was a crazy extremist now thinks the country is ready for him to be president. It is both pathetic and frightening that the only would be leaders the GOP can produce are those who seem driven to impose their own intolerant, divisive and exclusionary religious views on all Americans. Here are some highlights from Politico:
*
POLITICO has learned Santorum will visit first-in-the-nation Iowa this fall for a series of appearances before the sort of conservative activists who dominate the state GOP’s key presidential caucuses. The Pennsylvanian, who lost his 2006 reelection bid, will visit Iowa on October 1, appearing on a Des Moines radio talk show and speaking to a luncheon and workshop of Iowa’s Right to Life group before heading east to Dubuque, where he’ll headline a fundraiser for the conservative America’s Future Fund PAC and then speak about the future of the GOP to a public audience in the Mississippi River city.
*
“I’m very concerned about the state of affairs in this country and how Republicans are dealing with [issues], so this is an opportunity for me to go out and talk about things I think we need to be doing to turn this country in the right direction,” Santorum said of the Iowa trek — a visit invariably seen as presidential water-testing for any ambitious politician.
*
And Santorum, an outspoken social conservative known by Republicans nationwide for his anti-abortion activism, could find support among the many conservative Christians who reliably participate in the GOP’s presidential caucuses. Citing energy and health care, Santorum said: “One of the reasons I wanted to talk to the Right to Life folks is we can’t lose the moral component of those two bills as well as a lot of other things going on in Washington.”
*
But having been thumped by 18 percentage points in his bid for a third term and out of office since 2006, Santorum may have a difficult time appealing to a savvy Hawkeye state electorate that is likely to have a full complement of social conservatives to choose from.
*
He just sent an email to Republican National Committee donors likening 2010 to 1994 — the year he and other Republicans were swept into Congress thanks to deep voter discontent with Democratic majorities. “A new tide of popular grassroots opposition to the Obama Democrats' senseless policies and insatiable hunger for power is rising across America,” Santorum wrote in the fundraising message.
*
I sincerely hope that Ricky's delusions of grandeur crash and burn quickly - the last thing the country needs another conservative nutcase in the White House.
Posted by Michael-in-Norfolk at Thursday, August 13, 2009