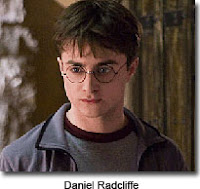 Daniel Radcliffe, who just recently gave a major donation to the Trevor Project, has taken another step in support of LGBT youth by blasting homophobic Christo-fascists who oppose education about homosexual sex in the classroom. Like it or not LGBT youth do exist and they have every right to competent and fact based sex education just like every other student (although I suspect that these same people oppose sex ed period unless it's abstinence only - an approach that has been documented NOT to work). We truly need more stars speaking out and putting their money where their mouths are when it comes to challenging the hate and intolerance disseminated daily by "family values" professional Christians. Frankly, I believe that nothing would make some of these homophobes happier than to see all LGBT individuals sicken with HIV and die. Here are some highlights on Radcliffe's statements:
*
20-year-old Harry Potter star Daniel Radcliffe has, in an interview with a homosexual magazine, expressed anger and intolerance for parents who oppose education about homosexual sex in the classroom. "Then there's all this stuff at the moment, which is hateful, about people being up in arms about the idea of gay sex education in schools. Hello!?! Actually for the one or two gay kids in the class, it's f***ing vital! It really makes me angry," he said in an interview with Attitude.
*
The magazine quotes Radcliffe continuing his tirade against pro-family parents saying: "I just loathe homophobia. It's just disgusting and animal and stupid and it's just thick people who can't get their heads around it and are just scared." He concluded the point assuring his interviewer, "I'm not just saying that because I'm being interviewed for Attitude. I'd be using a lot stronger language if this wasn't on tape."
*
Radcliffe returned to the theme when asked about Potter author Rowlings' admission that she intended one of the characters in the novels and film to be homosexual. "The idea that there can't be a gay character in a kid's film," he said. "It's the same thing, this terrible fear of exposing anybody below the age of consent to anything vaguely gay … it's ridiculous. I just brushed those questions aside. I'd never normally do that but some things I won't waste my time with."
*
Kudos to Daniel for calling it like it is.
Posted by Michael-in-Norfolk at Saturday, August 15, 2009