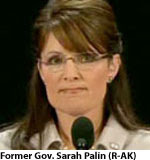 UPDATED: Conservative columnist David Brooks described Palin and other Republicans claiming that the proposed health care reform plan would lead to mandatory euthanasia and assisted suicide:
*
Here’s what conservative columnist David Brooks had to say yesterday on Meet the Press about Sarah Palin’s claim that health care reform would create a “death panel” that could decree the death of her son: Again, that’s crazy. If–the, the, the crazies are attacking the plan because it’ll cut off granny, and that–that’s simply not true. That simply is not going to happen.
*
Brooks went further than merely denouncing Palin’s “death panel” claim. He also said that those furthering the idea that the House Dem health reform bill could result government euthanasia of your grandma are “crazies.”
*
As regular readers know, I am a strong advocate for heath care reform if for no other reason than my own experience when one of my children was stricken with bacterial meningitis and I experienced first hand how even "excellent" insurance coverage was no where near adequate to deal with an unexpected catastrophic illness. Our savings were wiped out and the beginning of my financial problems began because of all the non-covered costs, My former wife's breast cancer the following calendar year was the final straw. This is the sad reality of health care in the USA where medical costs are among the leading cause of families seeking bankruptcy as a last resort in an effort to avoid losing everything. Despite this reality, the GOP and its lunatic fringe base (which now constitutes the bulk of the party) is doing all in its power to disseminate lies and disinformation to kill efforts at health care reform. Assisting in this effort is the every delusional Bible Spice Palin who has taken demagoguery to new levels. Here are some highlights from TPM.com on Palin's latest bat shittery (Note how she cites Michele Bachmann who is equally untethered from reality in making her argument):
*
In a new posting on her Facebook account, former Gov. Sarah Palin (R-AK) made a dire statement about health care reform -- that it could result in an Obama-created "death panel" killing her infant son with Down Syndrome:
*
The America I know and love is not one in which my parents or my baby with Down Syndrome will have to stand in front of Obama's "death panel" so his bureaucrats can decide, based on a subjective judgment of their "level of productivity in society," whether they are worthy of health care. Such a system is downright evil.
*
And she pointed Americans' attention to a recent speech by none other than Rep. Michele Bachmann (R-MN), warning of the dastardly involvement of Rahm Emanuel's brother, who is a doctor, in the health care debate:
*
Rep. Michele Bachmann highlighted the Orwellian thinking of the president's health care advisor, Dr. Ezekiel Emanuel, the brother of the White House chief of staff, in a floor speech to the House of Representatives. I commend her for being a voice for the most precious members of our society, our children and our seniors.
*
The fact that Bible Spice is widely supported by the GOP base is a testament in and of itself as to how debased and delusional the GOP has become. Indeed, to be a Republican nowdays, one must firt undergo a lobotomy. I truly find it frightening that in this day and age that there are so many people who have not grasp on objective reality. As for Palin, no one should dispatch her down syndrome child. She herself is another matter.
Posted by Michael-in-Norfolk at Monday, August 10, 2009