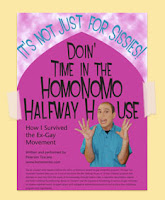 I guess it is to be expected that those who have made a lucrative living off of promoting the "ex-gay myth" and "choice myth" would not quietly accept the conclusions of the American Psychological Association that "change therapies" do not work and that there is no evidence to support claims that they do work. But then one must also remember that these are the same folks who believe that humans and dinosaurs co-existed on Earth. They live in a bizarre alternate universe where objective facts and reality are of no consequence if they counter their whacked out religious beliefs. Among those who are still claiming that gays can change their sexual orientation are a licensed counselor in El Paso, Texas - who hopefully will soon be up on ethical charges for her violation of the APA standard - and homophobes extraordinaire, Stanton L. Jones of Wheaton College and Mark A. Yarhouse of Regent University. For those unfamiliar with Wheaton College, it is a evangelical Christian college that has a statement of faith and requires applicants to have recommendations from their pastors for admission. As for Regent University, it was founded by Pat Robertson which eliminates the need for any further explanations. Thus, anyone who expects an unbiased report from faculty at either college is delusional. First some highlights from KFOX 14 in El Paso:
*
EL PASO, Texas -- The American Psychological Association adopted a resolution this week denouncing the use of therapy to convert gay people to become straight, a process called reparative therapy. Despite the resolution, El Paso doctor and pastor Becky Personett, said she will not stop counseling those who want to convert to heterosexuality.
*
Personett claims just five years ago, she was gay. "It's been five years now that I've been on my journey,” Personett said. "I don't feel denied, don't feel put off, I just know that I am the woman that God originally wanted me to be." Now Personett considers herself an ex-gay and counsels other local El Pasoans that are quote looking to “get out of homosexuality.”
*
For Personett, the APA’s findings are not going to change anything for her. "No, I won't change. I'm going to stay with a process that if there is hope and if there is help, why wouldn't we offer that? Why would we let these people go on in their misery?” Personett said.
*
As for Jones and Yarhouse, the Baptist Press - I know, no surprise there - is promoting their work and a "study" they claim flies in the face of the APA's analysis. Besides involving only a tiny study group, the Jones/Yarhouse study - which claims a 53% success rate - has a very bizarre definition of "success." In fact only 23% claimed to have changed to straight, and all of the remaining "success" stories involved total celibacy. Of course, after 37 years in the closet pretending that I was straight, I take the claims of the 23% claiming to have changed with a grain of salt. It is amazing what religious belief and religious induced self-hate can get one to believe about themselves. Here is some of the whining coming from Jones and Yarhouse:
*
Jones expressed frustration that the APA task force didn't take their 2007 study seriously."They selectively apply rigorous scientific standards," he said. "So when it comes to examining the evidence that sexual orientation change can occur, they apply extraordinarily rigorous standards, and those standards allow them to disregard significant evidence that sexual orientation change can occur. That's what happens with our study. They, I think, invalidly applied several methodological concerns to dismiss our study.
*
To ask the APA to accept the Jones/Yarhouse results is akin to asking the American Medical Association to accept studies by witch doctors as valid research. Only Kool-Aid drinkers will believe their storyline and one can only hope that lazy reporters for the MSM will read and heed the APA statement that programs like those espoused by Jones and Yarhouse are - certainly in my opinion - utterly fraudulent.
Posted by Michael-in-Norfolk at Tuesday, August 11, 2009

I went to Wheaton College. (Long story.) I actually came out, albeit quietly, while I was there. I had a couple other fellow gay friends who were also students there. One came out a little more vociferously than I, and he got so much hate mail from fellow students, he left. The other decided to attend Exodus, and to this day lives a miserable life trying to come to terms with his sexuality.

I recently wrote an email to the president of Wheaton College. Let's just say he wasn't thrilled to hear from me. Never got a response, though I know he got it. He remembers me. Didn't think I was worthy of a response though the letter was written respectfully. He didn't care about my criticisms with how the college has handled the subject of homosexuality.

It's a shame. They do so much harm.