“My Trip Down the Pink Carpet” 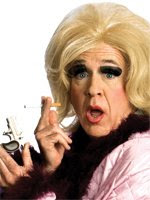 In an amazing stroke of luck, Leslie Jordan will be coming to Norfolk on September 13, 2008, for one show which will be a benefit for Tidewater AIDS Community Taskforce. I know a few folks who were able to see Jordan's show in some other cities and the reports are that it is hysterical. I've been a Jordan fan ever since I first saw Sordid Lives in which he plays Brother Boy. For those who do not remember Jordan from Will & Grace or the original movie, check out Sordid Lives the Series on LOGO on Wednesdays at 10:00 PM EDT. BTW, Jason Dottley who plays "Ty" in the series stopped by and left a comment on this blog last week. Here are some highlights about Leslie Jordan's career and successes:
*
His critically acclaimed one man show entitled “My Trip Down the Pink Carpet” just completed a 25 city summer tour and has been a coast-to-coast triumphant tour-de-force. Continuing into the Fall by popular demand, Jordan is set to make his Virginia debut when the show plays Norfolk’s TCC Roper Performing Arts Center (located in the former Loew's State Theater building). The one night only performance is set for Saturday, September 13 at 8:00 P.M.
*
Jordan’s current run in the limelight has also been reinforced with the recent premiere of SORDID LIVES, THE PREQUEL, reprising what arguably is his best known role of Brother Boy. His appearance in the 1998 cult classic first brought him to prominence on the art house film circuit. Premiering on the LOGO Channel in July, the new series has been airing throughout late Summer as a 10-episode follow up and as with the original, Jordan’s scene stealing presence is a delight to behold.
*
Tickets for the Norfolk engagement of “My Trip Down the Pink Carpet” at TCC Roper Performing Arts Center located at 340 Granby St. are available through Ticketmaster by calling (757) 671-8100.