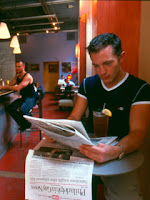 Perhaps it is inspired in part by the money being spent by gays going to California to get married or by the new coverage of gay marriage in Massachusetts as the antiquated 1913 which has until now been an obstacle to out of state couples gets repealed, but in any event the latest issue of Newsweek has a story on LGBT buying power and the growing efforts to market to LGBT consumers. Not that this progressive mindset has taken too much of a foothold in backwards markets like the Hampton Roads area of Virginia where knuckle draggers and Pat Robertson still weld too much influence. Nonetheless, HRBOR and Equality Virginia are working to educate straight owned businesses that advertising to the LGBT market makes good business sense. As I have stated numerous times, I believe the LGBT community (in the USA and worldwide) needs to flex its financial muscle and support gay and gay friendly businesses while at the same time shunning those businesses that are not supportive of LGBT rights and the LGBT community. Here are some story highlights:
*
There's a new gold rush in California, but the rush is to the altar. Gay and lesbian couples from any state can come to California to tie the knot. As a result, a growing number of businesses are saying "I do" to the same-sex marriage market, helping thousands of couples realize their dream weddings.
*
LGBT buying power is expected to total $712 billion in 2008, according to a recent study by Witeck-Combs Communications, a Washington, DC-based firm that specializes in the LGBT consumer market. By comparison, the U.S. wedding industry as a whole will ring up an estimated $62.8 billion this year.
*
According to a recent study by UCLA's Williams Institute, same-sex marriages in California would bring in $683.6 million and generate almost 2,200 new jobs during the next three years, both from 51,000 in-state couples and the projected 68,000 couples traveling to the state to get married.
*
Building a loyal clientele in the LGBT community requires more than just gay niche marketing, Rudolph says, in which advertisements appear in strictly gay-audience magazines and websites.
*
"Just slapping a rainbow logo on something isn't enough--there isn't anything wrong with that, but you have to do more," Rudolph says. LGBT consumers see through guarded or insincere marketing, she says. When choosing a business, they often look for references, a track record of supporting the LGBT community and a non-discrimination policy.
*
Relaying a personal anecdote on a business website about why that business supports the LGBT community is a good idea."But even if you don't have a gay relative or story to tell, it behooves small businesses to do something within the community. Make a connection to the LGBT community," Rudolph says, either through participating in activities, making a donation to the local branch of a national LGBT organization or sponsoring the local high school's gay-straight alliance.
Posted by Michael-in-Norfolk at Wednesday, July 30, 2008