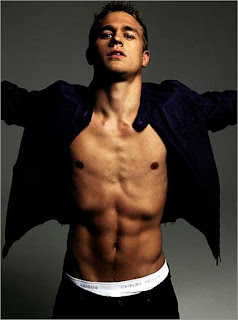 I'm a lover of history and have studied a great deal of classical Greek and Roman history in college and through reading on my own in the subsequent years. Thus, I was excited to read that a new movie based on French writer Marguerite Yourcenar's novel, Memoirs of Hadrian (Mémoires d'Hadrien) is apparently about to begin production. From a gay perspective the movie should be quite interesting in asmuch as Hadrian's great love was for the beautiful Antinous, another male. The movie, describing the life and death of Roman Emperor Hadrian will be directed by John Boorman. Hadrian is expected to be played by Antonio Banderas while Charlie Hunnam (pictured at left) has been cast as his lover Antinous. Yes, indeed, the eye candy will be great. Needless to say, the knuckle draggers will be in a vapor if the movies correctly depicts the gay love affair between Hadrain and his Antinous. Heaven forbid that the REAL history of gays throughout history be told. Here are some highlights from The Guardian:
*
Later this summer filming will start in Morocco on a version of the emperor's story by British director John Boorman. Based on Marguérite Yourcenar's 1951 novel, Memoirs of Hadrian, Boorman's film casts Antonio Banderas in the lead role and Charlie Hunnam as Antinous, the Greek boy who became his lover and then drowned mysteriously in the Nile.
*
'Hadrian was a real visionary. We will be telling an intimate story and a broad, epic story,' said Boorman this weekend. 'He managed to consolidate the empire, but in doing so he sowed the seeds of its ruin. His armies began to soften.'
*
This organised dictator had many guises. He was homosexual and loved architecture and art, but he was also portrayed as a warrior, a beacon of learning and even a god. On top of all this, he was also a poet and writer, penning his own lost memoir . . . Edward Gibbon, the 18th-century historian, began his account of Rome's decline and fall: 'Under Hadrian's reign, the empire flourished in peace and prosperity. He encouraged the arts, reformed the laws, asserted military discipline, and visited all his provinces in person. His vast and active genius was equally suited to the most enlarged views, and the minute details of civil policy.'
*
The physical remains of his energy are visible even today. Aside from the British wall, two other vast building projects - the restoration of the Pantheon and his tomb, the Castel Sant'Angelo, still add gravitas to the Roman skyline 1,900 years later.
Posted by Michael-in-Norfolk at Thursday, July 31, 2008