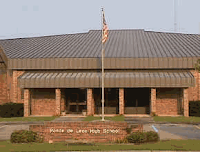 365gay is reporting that in a newly released opinion a Federal Judge has strongly chastised Ponce de Leon High School's former principal and in directly the school district in a stinging opinion. I posted about the situation a few months back when Judge Richard Smoak initially ordered the school and school division to cease censorship of students who want to express their support for gay people. The new opinion goes on to show just what levels of anti-gay religious fanaticism was rampant at Ponce de Leon High School (pictured at left). The Christianists whine incessantly about religious freedom, but then arrogantly and obnoxiously trample on the religious freedom rights of others. They are self-centered, self-righteous, and self-satisfied bullies and hypocrites in my view. Notice how Confederate flags were fine, suggesting yet again that most extreme Christianists are also racists. Here are some story highlights:
*
(Ponce de Leon, Florida) A federal judge has accused a Florida high school principal of going on a witch hunt for gays. In a stinging rebuke, US District Judge Richard Smoak, said in a written ruling that Ponce de Leon High School principal David Davis led a “relentless crusade” against homosexuality at the school. “Davis embarked on what can only be characterized as a witch hunt,” Smoak’s ruling said. The ruling also said that Davis led “morality assemblies” that ignored the First Amendment.
*
During the two-day trial in May, Davis testified that he believed clothing, buttons or stickers featuring rainbows would make students automatically picture gay people having sex. He went on to admit that while censoring rainbows and gay pride messages, he allowed students to wear other symbols many find controversial, such as the Confederate flag.
*
The school district replied that it would not allow any expressions of support for gay rights at all because such speech would “likely be disruptive.” The district then said that such symbols and slogans were signs that students were part of a “secret/illegal organization.”
*
The judge also warned the district not to retaliate against students over the lawsuit.
Posted by Michael-in-Norfolk at Monday, July 28, 2008

This story made http://detentionslip.org! Voted #1 for crazy education news.