A Father's Love and Pride 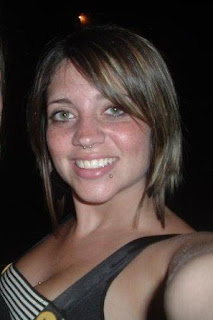 I had dinner this evening with my youngest daughter (pictured at right) who I find to be such a wonderful treasure. She has been so supportive of me throughout the divorce and in some ways has become a vocal advocate for gay rights in her own right. During our rambling conversation over dinner, she confided that in classes where the issue of gay rights or gay marriage has come up, she always takes the pro-gay argument. Given that she's been one to debate anything and everything since she was a small child, I suspect she gives better than she gets. I'd love to see her tear into some Christianist nutcase in a debate. :) As we were saying goodnight before she headed out to meet a friend, I gave her five HRC bumper stickers - one for her car and some for some of her straight friends who wanted them (some live in in our old neighborhood, which I find most amusing and encouraging at the same time).
*
She also said something interesting: that she thinks in the long run, my coming out and the associated upheaval it set in motion, including her move with her mother to a less "perfect" neighborhood, may have been a good thing. She feels that it saved her from "the alternate universe" that her friends in our former upscale, conservative, Republican dominated neighborhood inhabit. She feels she is much more in tune with the "real world" than would otherwise have been the case had she remained living in that neighborhood. Her comment made me realize that perhaps I have unduly flagellated myself (we former Catholics excel at that) for the turmoil and change my coming out triggered. I do feel confident that had I not come out, I'd be dead now from suicide which would have left my children with something far worse to live with.
*
My children definitely make all the years of being in the closet have some meaning and value. They are my best legacy and are wonderful individuals. I love them more than they will probably ever realize.
Posted by Michael-in-Norfolk at Friday, August 01, 2008

Thanks for highlighting my blog. I am pleased you liked it and thought enough to blog about it. Your daughter is beautiful and you must be proud. While it doesn't always work out this way I have found that children of MOMs tend to be more openminded than there "normal" friends. They are a force themselves in the gay movement and should not be discounted.