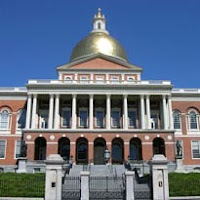 Wow, the fundies will be foaming at the mouth over this new legal development as well. Now non-residents will be able to marry in Massachusetts and return to their home states and thus increase the likelihood of lawsuits challenging anti-gay marriage laws in those states either under state constitutions or the U. S. Constitution. When one reviews the history of the 1913 law, it was clearly motivated by reprehensible racial discrimination and prejudice and the Massachusetts legislature did the right thing (contrary to say Virginia which still has not removed the old sodomy statutes from the Virginia Code notwithstanding the decision in Lawrence v. Texas). Here are some highlights from Bay Windows:
*
The bill to repeal the 1913 law is on its way to Governor Deval Patrick, who will sign it into law. The bill cleared a final hurdle this afternoon, when the House of Representatives passed the bill on a roll call vote after about 45 minutes of debate. The vote was 118-35, with five members not voting.
*
State Rep. Byron Rushing (D-Boston) began debate on the repeal by giving a history of the law, and disputing statements by those who have said it does not have racist origins."Well sorry. sorry. There was a lot of concern about interracial marriage in this country in 1913," he stated, noting the controversy at the time over Jack Johnson, an African American prizefighter, marrying a white woman. Rushing said news of Johnson’s marriage to a white woman in 1910 prompted a national uproar over the issue of interacial marriage, and in 1913, the same year Massachusetts passed its statute, ten other states passed anti-miscegenation laws.
*
Paul Loscocco (R-Holliston) also spoke in favor of the repealing the law. Loscocco said the 1913 law is offensive not only to out-of-state same-sex couples but to those who reside in Massachusetts, since it singles out same-sex relationships as inherently more suspect than heterosexual ones. "Equal under the law means just that, equal," said Loscocco. He also took aim at marriage equality opponents who claim that same-sex marriage was imposed on the state by activist judges. Loscocco said the legislature effectively gave its approval to marriage equality by not taking legislative action against the Goodridge decision and by voting down a constitutional amendment to ban same-sex marriage last June.
*
Following the vote Spellane told Bay Windows that the overwhelming majority was a sign of the strong support for marriage equality in the legislature."It shows what we’ve been talking about, that as each day passes more and more people are supportive of the Goodridge decision and the right of gay couples to marry here in the Commonwealth, and today by this vote overwhelmingly more legislators have voted to uphold the rights of same-sex couples throughout the country," said Spellane.
Posted by Michael-in-Norfolk at Tuesday, July 29, 2008

Email ThisBlogThis!Share to TwitterShare to FacebookShare to Pinterest
Labels: equality under the law, gay marriage, Massachusetts