Proposition 8 Supporters May Sue Over Accurate Description of Initiative

UPDATED: In more bad news for the Christianists, 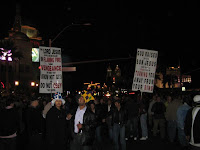 the Los Angeles Times is also reporting that Pacific Gas & Electric ("PG&E"" has announced it is donating $250,000 to the effort to defeat Proposition 8. Moreover, the utility also said it will spearhead the formation of a business advisory council that will seek to get other businesses around California to to defeat the ballot initiative that would amend the state constitution to define marriage as only between a man and a woman.
*
*
*
What a surprise! The folks who claim to be "Godly Christians" and who should, therefore, support telling the truth are all in a dither because the California Attorney General's Office has revised the description of Proposition 8 to accurately describe its legal impact. God forbid that voters accurately understand what passage of the initiative would mean. Here in Virginia, the Marriage Amendment that unfortunately passed in 2006 was advertised by its supporters as necessary to "protect marriage." What they left out was that ALL unmarried couples, both gay and straight, were targeted. Thus, many unmarried straights to this day do not understand the consequences of the Amendment's passage and how it renders their partner a total stranger under the law. It would appear that the Christianist organizations seek to pull the same trick in California. Or at least they did until the new description was released. Here are some highlights from the Los Angeles Times:
*
Supporters of Proposition 8, the proposed state constitutional amendment that would ban gay marriage, said they would file suit today to block a change made by California Atty. Gen. Jerry Brown to the language of the measure's ballot title and summary.
*
In a move made public last week and applauded by same-sex marriage proponents, the attorney general's office changed the language to say that Proposition 8 seeks to "eliminate the right of same-sex couples to marry."Jennifer Kerns, spokeswoman for the Protect Marriage coalition, called the new language "inherently argumentative" and said it could "prejudice voters against the initiative."
*
Steve Smith, campaign manager for No on Proposition 8, applauded the language change."What Proposition 8 would do is eliminate the right of same-sex couples to marry, which is exactly what the attorney general put in the title of the measure," he said. "It will be very difficult for them to win the case."Political analysts on both sides suggest that the language change will make passage of the initiative more difficult, noting that voters might be more reluctant to pass a measure that makes clear it is taking away existing rights.
*
Gareth Lacy, a spokesman for the attorney general, denied that there was any political motivation for the move.Instead, he said, the change was necessary because of the dramatic turn of events that have taken place since the petitions were circulated: namely that the California Supreme Court legalized same-sex marriage and thousands of gay couples have since wed."The title and summary accurately reflect the measure," Lacy said.
*
If the Christianists' agenda cannot stand the bright light of day, with voters being able to clearly understand the consequences of a "Yes" vote, perhaps that ought to tell them something. Unfortunately, truth, honesty and integrity are not issues with which these fanatics concern themselves.
Posted by Michael-in-Norfolk at Tuesday, July 29, 2008

Jennifer Kerns and the “Yes on 8″ campaign crew invite you to attend their August 14th Open House in Irvine:

I’m wondering if those who’d deny civil rights to others don’t deserve to get their parties crashed?