Yesterday evening I went to a party put on by a gay couple - Mike and Mark - who have open their home for parties on a regular basis with a goal of helping to unify the LGBT community and as a way for LGBT individuals to network and make contacts. They started the process back in 2006 when Equality Virginia and the Commonwealth Coalition were working to rally people to oppose the Virginia "Marriage Amendment," which sadly passed in November 2006. While the Christianists were successful in writing discrimination into the Virginia Constitution (perversely, it was added to the Bill of Rights), they unknowingly seem to have lit the fuse that has set in motion state wide efforts to build a unified and powerful LGBT community. Mike and Mark are working in unity with HRBOR, Hampton Roads Pride, volunteers from TACT and now HROC. Last night's event was huge and there had to be far in excess of 200+ people in attendance.
*
What would have blown the minds of the Christianists was that it was a FAMILY picnic, with lots of children ranging in age from small toddlers to young adults - all there with their gay and lesbian parents (the attendee age range must have been from about 18 months to folks in their 70's). All of the kids - despite the poison disseminated by Daddy Dobson, et al - seemed well adjusted and were having a great time. Talking with the straight son of a gay man - the boy is about the age of my youngest daughter - he explained to others who had not met him before that he loves both his parents, but to be candid, he found his dad's friends much more interesting than his mom's and he loved the LGBT parties. I have to agree with him. The crowd was very diverse and had many professionals and business owners as well as a number of artists. In addition, HRBOR, HROC, TACT and other organizations all had members of their boards of directors attending.
*
It truly is exciting to see the LGBT community coming together more and more with increased collaborative efforts. The Christianists have awakened the sleeping tiger perhaps. Mike and Mark have a party scheduled for each month through the end of the year. Every party is basically a pot luck with people bringing food and beverages, but none the less, throwing your home open to large crowds is still a lot of work. Many have themes and as one would expect, folks REALLY get into some of the costume parties. What do the neighbors think? There's never been a complaint and as I was walking to my car, I was talking to a woman neighbor who had been enjoying the party as a guest herself. Thanks guys for all that you do. 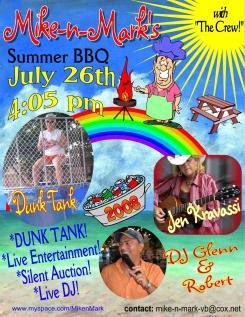 As you can imagine, functions such as this party is a great opportunity to market legal services to LGBT couples since Virginia is such an unfriendly state towards its LGBT citizens. I always take literature and business cards for the networking display table. The joys of having to market 24/7! This afternoon I have another party/networking event which hopefully will generate more leads.
Posted by Michael-in-Norfolk at Sunday, July 27, 2008