Is Newsweek Trying to Backtrack? 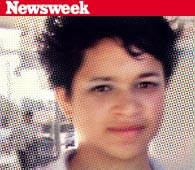 I posted last week about the Newsweek story on the Lawrence King murder in California. Like many others apparently, I felt that the Newsweek story focused too much blame on Lawrence King, the victim, rather than place blame on the shooter or society which tends to put a very low value on gays lives. Newsweek seems to be somewhat acknowledging that deficiency in an update that was done. Hopefully, the day is not too distant when a gay life will be given equal weight and merit with that of a straight homophobe. Here are some highlights:
*
Yes, he was a flamboyant kid who wore high heels and makeup. But many commenters felt this characterization suggested that Larry deserved to die. "It's a sad thing that the story isn't about how our society could create such a diabolical, cold-blooded, 15-year-old-child killer," writes CaraWinter of King's assailant, Brandon McInerney, who has been charged with first-degree murder and a hate crime (McInerney's public defender has not disclosed his defense strategy, but has said the school should be blamed for failing to step in amid rising tensions between the two boys.) "Instead, it's a story about how Larry was 'disruptive' in school, taunting and 'harassing' other kids, wielding his sexuality--implying he provoked his own murder! It's lunacy, and it's disrespectful of the poor, dead child."
*
Hundreds of others agreed that NEWSWEEK's story, which was billed as a "a tale of bullying, sexual identity and the limits of tolerance," placed the blame on King and the reaction he received at Oxnard, Calif.'s E. O. Green Junior High School. "This was an innocent young man trying to find his identity and fit in, the same issue that many of us struggled with in our youth," said Tishalyon.
*
It seems that whenever the magazine undertakes a story involving homosexuality, many readers are quick to argue that sexual identity is a choice and that religious doctrine should have been invoked. But in King's case, we also received responses from commenters who sought to separate out the issue of homosexuality from the debate: "If a girl who was extra flirtatious, incredibly forward and very aware of her sexuality, was shot to death by a guy who didn't want her attention, would we be considering [her] a victim, or blaming her for [the] murder[?]" wrote Seabasstin. "A better analogy would be a black kid who was perceived as 'too uppity' and got shot by a white kid," adds KevinVT. "And then Newsweek writes a story about it being, OK, really, because he was acting too black, because one of his principals was a black woman, and because the African American community found the situation to be evidence of racism."
*
Maeve Fox, the prosecutor in this case for the Ventura County District Attorney's Office, wrote that the NEWSWEEK story was "rife with inaccuracies" due to its use of anonymous sourcing. "Much of what these anonymous sources whisper into the ears of a complicit reporter will undoubtedly evaporate when and if they are called to stand," she wrote.
Posted by Michael-in-Norfolk at Sunday, July 27, 2008