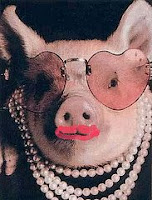 As I suspect most of you have figured out, I think Karl Rove is a disgusting pig and that he, the Chimperator, and Emperor Cheney have all broken various laws and need to be put on trial Whether or not they will ever beheld accountable for all the misdeeds they have done remains to be seen. None the less, I have to applaud those who bring media attention their crimes. This incident in Iowa, thus is quite amusing to me, and I totally agree with Rev. Guinn's statement and I do my best to never remain silent. Here are some highlights:
*
Des Moines, Iowa (AHN) -- Four people were arrested Friday for attempting to make a citizen's arrest on Karl Rove. The group of three Catholic workers and a retired Methodist minister and Peace and Justice Advocate were cited for trespassing and released after trying to enter the Wakonda Country Club in Des Moines where Rove was scheduled to speak at a Republican Fundraiser.
*
The small group were acting under Iowa law that states private citizens have a responsibility to arrest someone if they believe a felony has been committed. That person is then turned over to police officials and a judge for formal indictment. Under the law a federal judge must evaluate the charges and decide if an indictment should be made.
*
The retired minister, Rev. Chet Guinn, 80, told reporters who were on site for the pre-arranged arrest that everyone who remains silent when major crimes are being committed against all humanity becomes an accomplice.
Posted by Michael-in-Norfolk at Sunday, July 27, 2008