A New Book, “Jack and Lem: John F. Kennedy and Lem Billings, the Untold Story of an Extraordinary Friendship” 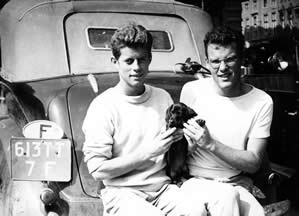 This new book by David Pitts, who has a longstanding interest in Kennedy, said that the inspiration for the project came from reading a variety of books over the years about the former president in which the name Lem Billings kept appearing, but was never fully explained. Pitts began researching the pair’s relationship and uncovered how progressive Kennedy was in terms of accepting Billings’ sexual orientation. It sounds like it would be an interesting read:
Beginning with their years at Choate, Billings often spent holidays and vacations with the Kennedys, although his family lived in Baltimore. He was also a fixture at the White House, which many found odd. Billings had a room there, and he frequently listened to the president vent about the international crises in Cuba and Berlin. Politicos wrote him off as Kennedy’s school friend who was a political lightweight, and others felt that he simply spent too much time hanging around.Persistent rumors about Kennedy’s bisexuality are not answered in this book. Pitts uncovered no evidence that suggested a sexual relationship between the two friends.
Posted by Michael-in-Norfolk at Saturday, July 21, 2007