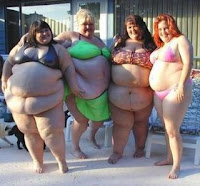 JOHNSON CITY, Tenn. (BP)–Southern Baptists are 30 times more likely to be obese than non-Christians and are the most obese of any denomination studied in the United States, according to a study released by Purdue University in 2006.

Perhaps God and/or evolution is on the side of reason, logic and science after all and has a mechanism to take care of these wingnuts!!!
Posted by Michael-in-Norfolk at Thursday, July 19, 2007