Bush to cede power to VP during colonoscopy 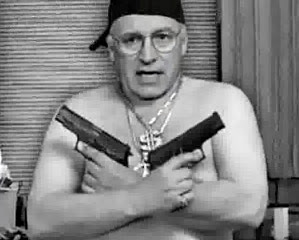 This is a bit scary:
WASHINGTON - President Bush will undergo a routine colonoscopy Saturday and temporarily hand presidential powers over to Vice President Dick Cheney, the White House said. He last underwent colorectal cancer surveillance on June 29, 2002 (MY COMMENT: Perhaps that's when they inadvertently removed his brain??).
With Bush out of it for several hours, I can only hope Vice President "Darth Vader" Cheney does 't decide to start World War III by attacking Iran, North Korea, Pakistan, or God knows what other countries. Cheney has demonstrated time and time again that he thinks he is above the law and not subject to any Congressional restraints.
Posted by Michael-in-Norfolk at Friday, July 20, 2007