Parents Choose to Accept Son Over Church and Friends 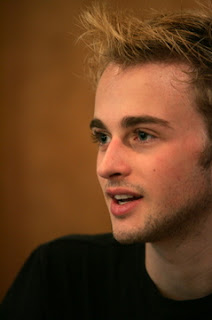 Here's a refreshing story from the Muskegon Chronicle that shows not all conservative religious adherents are bigots (http://www.mlive.com/news/muchronicle/index.ssf?/base/news-12/118449451566160.xml&coll=8&thispage=1):
In 2005, while his parents were getting ready for a Super Bowl party at their home in Spring Lake Township, Ari Beighley (pictured at left) asked if his mother had a couple of minutes to talk. Two hours later, mother and son emerged from conversation, their lives irrevocably changed. "Even when we were talking that day, I remember thinking: Things are never going to be the same again in this family," said Ari's mother, Colette Beighley.
"In a sense, everyone had his or her own 'coming out.' " By the end of the year, Ari Beighley's father, the Rev. David Beighley, 56, had his ministerial license "withdrawn" by the West Michigan District of the Wesleyan Church for, among other things, questioning the denomination's position that homosexuality is a sin, he said.
David Beighley, who also has his doctorate in family psychology, said even before his son "came out," he had a "growing uneasiness within me regarding some of the church teachings." The family sought out a new church home at Christ Community Church in Spring Lake, which is a "welcoming" congregation to gays and lesbians. After his ministerial license was revoked, David Beighley said, "I felt a curious freedom."
Posted by Michael-in-Norfolk at Sunday, July 15, 2007