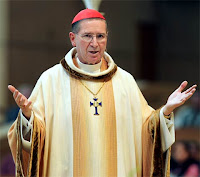 The Los Angeles Catholic Archdiocese has finally settled more than 500 lawsuits against the Archdiocese for sexual abuse of minors by priests and other religious order members. The settlement came on the eve of the commencement of the trial in the first of the hundreds of cases. Here are highlights of the Los Angeles Times coverage:
The settlement will effectively end a chapter in the sad saga of clerical abuse that has spanned decades, the resolution will come at a huge cost to the church. More than $114 million has been promised in previous settlements, bringing the total liability for clergy misconduct in the Los Angeles Archdiocese to more than $774 million. The figure dwarfs the next largest settlements in the U.S., including those reached in Boston, at $157 million, and in Portland, Ore., at $129 million. Hennigan said the archdiocese expected to pay $250 million in cash, with the balance coming from insurers and religious orders.
Cardinal Mahony had previously fought victims, their attorneys and prosecutors demanding confidential personnel files that tracked the problems of accused priests and the church hierarchy's reaction to them. As part of the settlement, the archdiocese agreed it will no longer contest the release of files to the public, one of the attorneys in the lawsuits said.
In Orange County, the Diocese of Orange two years ago paid out $100 million to 90 alleged victims who had filed lawsuits. As part of the settlement, the diocese released thousands of documents indicating a high-level cover-up of priest abuses.
Although Mahony has removed at least 17 priests from ministry over accusations of sexual abuse, his credibility has been called into question by cases like that of defrocked priest Michael Stephen Baker.In 1986, Baker told Mahony that he had abused two or three boys several years before. Instead of calling police, Mahony sent the priest to New Mexico for treatment and over the years transferred him to nine different parishes, where he allegedly molested 23 boys and girls.
To get a better picture of how corrupt the Catholic Church was in covering up the sexual abuse of minors, here are some figures the Los Angeles Times put together:
Major clergy abuse settlements nationwide since 2002
Archdiocese/Diocese-number of claimants-settlement amounts (in millions)
Los Angeles 570+ $764
Boston 983 $157
Portland, Ore. 315+ $129*
Orange 90 $100
Covington, Ky. 350+ $85
San Francisco 113 $73**
Oakland 56 $56
Spokane, Wash. 175 $48
Tucson 60 $36
Sacramento 33 $35
Louisville, Ky. 250+ $30
Hartford, Conn. 44 $23
Milwaukee 10 $17
That comes to $1.463 Billion in the USA alone. If Cardinal Mahoney has any integrity left, he will now resign, as should EVERY priest, bishop, cardinal and, if applicable, Pope, who participated in any way in the cover up of these horrendous crimes. No doubt William A. Donohue of the Catholic League will accuse me of anti-Catholic bigotry for making such a statement. Meanwhile, the knights of Columbus will continue to be the groveling lap dogs of the disgustingly corrupt hierarchy. For the full LA Times story see: http://www.latimes.com/news/local/la-me-priests15jul15,0,7511378.story?page=1&coll=la-home-center
Posted by Michael-in-Norfolk at Sunday, July 15, 2007