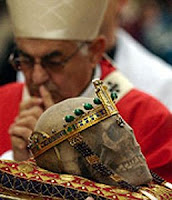 Another blogger gave me the link to a blog with this name. Check it out: http://pope-ratz.blogspot.com/. This opening comment sets the tone of the blog:

Pope Benedict XVI is the papal clone of John Paul II. As Cardinal Ratzinger he was the General of the Third Reich of the Catholic Church, the right-hand man of John Paul II in the great cover up of the pedophiliac holocaust committed by the JPIIPPA - the John Paul II Pedophile Priests Army.

It is nice to know that other bloogers are likewise trying to expose the rank corruption and moral bankruptcy of the leadership of the Catholic Church. As for Opus Dei (the skull of its founder is at left, above), the organization is down right scary.
Posted by Michael-in-Norfolk at Thursday, July 19, 2007