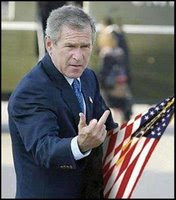 Yet another example of Chimperator Bush's bogus "compasionate conservatism (which I am sure the Christianists are applauding) since I am sure that many of those children are hispanic or black):
The White House said on Saturday that President Bush would veto a bipartisan plan to expand the Children’s Health Insurance Program, drafted over the last six months by senior members of the Senate Finance Committee.
The vow puts Mr. Bush at odds with the Democratic majority in Congress, with a substantial number of Republican lawmakers and with many governors of both parties, who want to expand the popular program to cover some of the nation’s eight million uninsured children.
How much more damage do to the country before his term expires?? The full New York Times story is here:
http://www.nytimes.com/2007/07/15/washington/15child.html?_r=1&adxnnl=1&oref=slogin&adxnnlx=1184505115-UtZOaszpTBVSyzANYoAd/w
Posted by Michael-in-Norfolk at Sunday, July 15, 2007