Impeach Now - Or Face the End of Constitutional Democracy 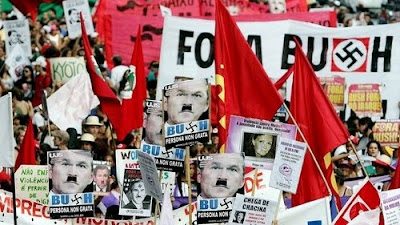 In one way it is nice to see that I am not the only one who views Bush/Cheney as potential dictators. PAUL CRAIG ROBERTS, who has always been pretty well regarded in the former version of the Republican Party (i.e., pre-Bush/Cheney) and among conservatives in general, has a chilling column (http://www.counterpunch.org/roberts07162007.html) out warning of the threat posed by Bush/Cheney. Here are some highlights:

Unless Congress immediately impeaches Bush and Cheney, a year from now the US could be a dictatorial police state at war with Iran.
Bush has put in place all the necessary measures for dictatorship in the form of "executive orders" that are triggered whenever Bush declares a national emergency. Recent statements by Homeland Security Chief Michael Chertoff, former Republican senator Rick Santorum and others suggest that Americans might expect a series of staged, or false flag, "terrorist" events in the near future.
Many attentive people believe that the reason the Bush administration will not bow to expert advice and public opinion and begin withdrawing US troops from Iraq is that the administration intends to rescue its unpopular position with false flag operations that can be used to expand the war to Iran.
Too much is going wrong for the Bush administration: the failure of its Middle East wars, Republican senators jumping ship, Turkish troops massed on northern Iraq's border poised for an invasion to deal with Kurds, and a majority of Americans favoring the impeachment of Cheney and a near-majority favoring Bush's impeachment. The Bush administration desperately needs dramatic events to scare the American people and the Congress back in line with the militarist-police state that Bush and Cheney have fostered.
William Norman Grigg recently wrote that the GOP is "praying for a terrorist strike" to save the party from electoral wipeout in 2008.
If the Bush administration wants to continue its wars in the Middle East and to entrench the "unitary executive" at home, it will have to conduct some false flag operations that will both frighten and anger the American people and make them accept Bush's declaration of "national emergency" and the return of the draft. Alternatively, the administration could simply allow any real terrorist plot to proceed without hindrance.
Ask yourself: Would a government that has lied us into two wars and is working to lie us into an attack on Iran shrink from staging "terrorist" attacks in order to remove opposition to its agenda?
Unfortunately, Mr. Robert's theory makes too much sense not to be seen as a potential Bush end game. Roberts was Assistant Secretary of the Treasury in the Reagan administration and was Associate Editor of the Wall Street Journal editorial page and Contributing Editor of National Review.
Posted by Michael-in-Norfolk at Friday, July 20, 2007

The constitutional crisis has been on our radars for well over a year. It was so scary that even Middle America agreed to hold its nose and vote for the Democrats, under the assumption they would block the Duarchy. They may be incompetent to govern, but clearly they could undermine the totalitarian schemes of the Right wing Administration. And thus, kicking against their intuitions, they elected Democrats to majorities in both Senate and House. At least, "checkmate" was assured, roared those in victory.

Well, not quite, huh? Lots of histrionics, gestures, ridiculous rhetoric, blaming, gaming, but no significant changes. Indeed, they reauthorized the funding, fearful of the "appearance" they would leave if they did not "support the troops" in Bush's gambit. His threats and twists made them cave like Chicken Littles, with Joe Biden, of all people, saying "he had too," because they could not override a veto! But, wait. If the funds are NOT authorized, what's to override? Either way, Bush must capitulate to those with the purse strings, assuming the Democrats had the courage to cut them. In either case, whether Bush vetoed a bill that did NOT reauthorize or not would have achieved the same desired effect. No?

Ask Biden! No a veto-proof Congress requires that he vote to re-authorize, which then he could not muster enough votes to override, so nothing changes. That "sea change" voters expected, if only to "block" or "checkmate," is now theater in which who is playing the greater fool? Bush/Cheney? Or the Democrats as dissimulating enablers? Other than raise the minimum wage, what have Democrats done recently for this country? Played Theater of the Absurd in Reid's gambit to reward his THREE sons who are lobbyists.

Oink. Oink. They are all corrupt, ethically-challenged, and unprincipled, that rating "bad" to "worse" only delivers "more of the same." The Republicans, I grant you, are boldly more hypocritical and two-faced, but at least they are hypocritically united in their hypocrisy. The Democrats are so co-dependent on lobbyists, wo weak-kneed they drop their pants, they don't even bother to take it to D.C. madams, because they cannot even get erections. They cannot get aroused, so who needs condoms and puritanical values?

And Redstate revels in another Democratic example of pathetic self-immolation by weak, impotent, and spineless enablers. At least, those with Raw Meat devour their weaklings in pretense. It's like Roman Lions eating the Christians, except the Evangelicals are lemmings in the Gladiator contest, certain Prophet Bush will deliver the Rapture. What Democrats deliver is a fuck without a cum scene (unless DNA proves otherwise). Actually, without their ED medications, they simply do an all-nighter pretending to pretend to be the "clean cop" in the pornography that has captivated D.C.'s power and sex-a-holics. At least the Republican hypocrites are unabashed about their hypocrisy, boldly professing their dicks get hard without ED props, and let weak pretend they could cum, if anyone asked them if it mattered. The whole Animal Farm is such a farce, that I actually prefer the hypo-critical-arrogance of the adulterer to the feigned innocence of purity Ivory Soap Anti-Porn Queen (aka, frigid Hilary and her host of excuses for why husbands seeks others). Compare Vitter's wife to Hilary, and therein is a perverse pride in the fact that her husband CAN, not that he MUST. Not that I find the comparison apt, in fact I find it pathetic, but at least she knows WHO and WHAT is porking WHO, and others can at least respect her honesty, if not her perverse values, rather than blame vast-right-wing conspiracies for her own frigidity.

I'm tired of ALL the lame excuses and abuses, but until we call ALL of them to account, many will prefer the red-neck who DARED rather than nerd and victim who would not try, and BLAMES everyone but the one in the mirror. It's all pathetic, especially the weak too weak to show any courage or spine. But in the Struggle for Survival, the Red Meat is more tantalizing than vegan's noodle soup. Roberts' assessment has been widely-known, but the flesh of animals clouds out the weakness of the frail. We saw that this week in the worst gambit in years. Chicken Littles never get much respect, and don't deserve it.