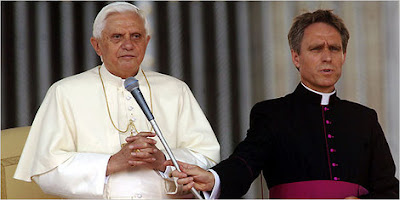 In late 2006, the New York Daily News reported on Italian speculation that Benedict is himself homosexual. A gay television personality, Fabio Canino, "opened his show with a puff of pink smoke wafting from the Vatican chimney" and cited the pope's "fondness for shopping and Prada shoes as evidence" that he is a "kindred" spirit. Canino also said that Benedict's hunky private secretary, Monsignor Georg Ganswein (pictured above), was the pope's "boyfriend." , was the pope's "boyfriend."

Based on my experience, the worst homophobes (especially in the Southern Baptist and ultra-conservative Protestant denominations type) are the self-hating, angry closet cases, who long for a same sex partner but are too paralyzed by religious dogma to act upon it. Instead, they attack others who are not afraid of their sexual orientation almost out of jealousy fueled hatred. If Benedict is gay and has a boyfriend, he would not fit the typical pattern. But then, the Catholic Church's history is full of gay popes (the 1500's were full of them), popes who fathered children, etc., so perhaps the catholic hierarchy doesn't fit the typical Evangelical Christian model.
Posted by Michael-in-Norfolk at Tuesday, July 17, 2007

One need look to the U.S.'s episcopacy to discover "forked tongues" speak and do different things. A substantial percentage of the U.S. episcopacy is gay, whether active or inactive. At one time, many of the church's priests were also gay, but then the Pedophile Scandal needed a Scapegoat, and gay priests became the target. The parallels to Jesus being the Scapegoat is lost on some folk, but many bishops sought to reform the church's teaching on a biological norm, until JPII and Ratzinger decided to up their ultramontane reputations as authortarians. Presto! God is the Author of Intrinsic Disorders. It even was adopted into the Catechism, even though NO theologian, moral or dogmatic, countenances such a preposterous assertion. I've met Fr. Fessio, S.J., one of Ratzinger's proteges while at the University of San Francisco. Despite his Italian good looks, the man is a Nazi and acts like one. The Society of Jesus (Jesuits) have never known what "to do with" him (sort of reminds us of the problem with Jesus' Beloved Disciple), but alas his Reactionary Ignatius Press conjoined with Domino Pizza Traditionalist Fundamentalism, and they're recreating Calvin's Geneva in Florida as Ave Maria, FL, where good, wholesome, Nazi-like Catholics can become dysfunctional like Hitler's Youth in Depression Germany. It raises the question that women have asked for centuries: Is power or sex more valuable to men? The Pedophile knows the answer. The Pope knows the answer. Power delivers sexual favors. And a Roman Collar colors it with God's favor. $750 million is Los Angeles' Archdiocese's "cost" in its power Sex Scandals of more than 150 innocent, young boys molested at the church's hand. Maybe the priesthood is a place to escape, to then re-appear with authority, which then grants the favors of sex, because of god's implicit sanctions.

I personally have known numerous men who sought refuge from themselves in the priesthood, just like Haggard, Bakker, et alia. Gay Liberation opened many of their closet doors, but left the Pedophiles with nowhere else to go. So, gays and women cannot be priests, gays are purportedly "intrinsically disordered," but dysfunctional pedophiles and aberrant Popes consumed with Prada fashion are harbored and protected rather than repent, confess, and do penance?

Gestapo-like priests rule Ave Maria, FL, and all venues with an iron hand, purged of all sensitivity and love. Somehow, I do not think Jesus would approve of his church. How one would evaluate that claim is itself a challenge, but if God is Love (much less exists), then the absence of love in his church suggests the guidance of the Holy Spirit left the church sometime ago.

Powerful, inverted, and perverted men rule it with an iron fist and stony hearts in the Prada Pumps and golden chasubles.

Mea culpa? Not when you're the Pope, you think you are infallible. How else could such strange teachings like "intrinsic disorders" enter the Catechism? No episcopal college has asserted such nonsense. And it sure as hell ain't in the Bible, which the church wrote. So who "divined" this new mystery of the magisterium? The first German Pope in centuries. Maybe some of Hitler has tainted more of him than he admits, like Gunter Grass? Perhaps, it's merely power for sex. But it sure ain't love, much less blessed.

Hey, I agree - I always think of Benedict XVI as the Nazi Pope. His mentality is the exact opposite of that of Jesus in the Gospels.