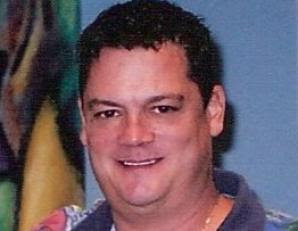 The apologists for the Christianist wingnuts always different the Christianists from the Islamic terrorists by stressing that Christian Fundamentalists would never kill or use violence. Not true!! Here's portions of a story from the Houston Chronicle:
A Cypress man charged in the death of a Southwest Airlines flight attendant (pictured at left) said Saturday that he was doing God's work when he went to a Montrose-area bar last month, hunting for a gay man to kill.
"I believe I'm Elijah, called by God to be a prophet," said 26-year-old Terry Mark Mangum, charged with murder June 11. " ... I believe with all my heart that I was doing the right thing." Interviewed in the Brazoria County Jail Saturday morning, Mangum said he feels no remorse for killing 46-year-old Kenneth Cummings Jr., whom relatives described as a "loving" son who never forgot a holiday and a devoted uncle who had set up college funds for his niece and nephew. He worked at Southwest for 24 years.
Mangum, who described himself as "definitely not a homosexual," said God called on him to "carry out a code of retribution" by killing a gay man because "sexual perversion" is the "worst sin." Mangum — who claimed he has studied the Bible for "thousands and thousands and thousands of hours" — said God first commanded him to kill during a "visitation," or dream, while he was in prison in 2001. He said his victim must be a man because men "carry the harvest of the sinner."
No doubt, the Islamic terrorists feel equally justified that they are doing Allah's will. I continue to believe that religious fundamentalism of all denominations is one of the largest treats to peace in the world at the moment. Despite this type of crime commited by one of their own it would appear, the Christianist still argue that gays do not need hate crime protections.
Posted by Michael-in-Norfolk at Sunday, July 15, 2007

This particular crime fails to demonstrate that Hate Crime laws are needed to protect GLBT people, or would have prevented this crime. Equal enforcement of existing criminal laws is required, with equal penalties. If additional punitive sanctions are sought against biased criminals, they should be remedied though the civil (tort) process.

With all of the abominations in the bible, it never ceases to amaze me that the fundamental christians seem to only focus on homosexuality..... a word that is never mentioned!

Of course with all the adultry committed by members of the republican party last week, all biblical references to that abomination must have suddenly disappeared.....

It's all about HOMOPHOBIA!