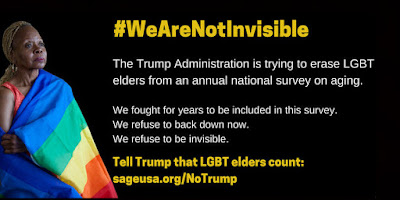 The Trump regime is continuing its assaults on the LGBT community to fulfill the Christofascist agenda of making gays invisible and/or subject to open discrimination and disparagement. The latest piece of this effort involves the elimination of LGBT seniors from the annual survey used by the Department of Health and Human Services to determine services to the elderly.  NBC News looks at this gratuitous mean-spirited development that will adversely impact elderly members of the LGBT community.  Here are highlights:

Advocates are outraged that questions about LGBTQ seniors have suddenly been removed from an annual survey that determines services for elderly Americans.

The Department of Health and Human Services (HHS) uses the National Survey of Older Americans Act Participants (NSOAAP) to decide how to allocate federal funding to groups that work with the elderly. For years, LGBTQ groups lobbied to have the survey include questions that would help identify the amount of lesbian, gay, bisexual and transgender elderly people who live in the U.S. and participate in services.

In 2014, questions about sexual orientation and gender identity were added to the survey — helping researchers determine the U.S. is home to about 3 million LGBTQ people over the age of 55.

The Trump administration released a draft of the 2017 survey, with only one noticeable change from previous years: The LGBTQ questions are gone.

"This was a stealth effort to strip LGBT elders out of the survey without anybody noticing," said Michael Adams, CEO of Services and Advocacy for Gay, Lesbian, Bisexual and Transgender Elders (SAGE), the nation's largest network for LGBTQ older adults.

A number of other national LGBTQ groups — including the Human Rights Campaign, the National Center for Transgender Equality and GLAAD — joined SAGE in assailing the removal of survey questions regarding lesbian, gay, bisexual and transgender elders.

"The Trump Administration is literally attempting to erase the LGBTQ community from the fabric of American history," GLAAD President and CEO Sarah Kate Ellis said in a statement emailed to NBC News. "Our LGBTQ seniors, many of whom survived the HIV and AIDS epidemic, do not deserve to have the government once again brush them off from obtaining transportation services, caregiver support, and even delivered meals that fit their needs."

The federal government uses the results of the NSOAAP survey to allocate around $2 billion for senior services across the nation. Many major elderly service organizations, such as AARP, offer programs for LGBTQ seniors. But it's the groups designed solely with LGBTQ elders in mind that likely have the most impact on the community.

According to a June 2016 report from the legal advocacy firm Justice in Aging, LGBTQ seniors are four times less likely to have children, and tend to live alone with few living family members. They depend heavily on drop-in centers and volunteer home-visit programs, like those offered through SAGE, for social contact and support.

And while the survey helps determine which groups get funding to care for their populations, it also sends a message about who makes up the U.S. elderly population.

"We hear over and over about LGBT elders who feel forced to go back into the closet to avoid mistreatment by caregivers and by other seniors," Adams said. "All of these aging service providers need to hear from this population, that they need to be protected from mistreatment."


Trump sold his soul - if he has one - to the Christofascists in order to win the evangelical vote.  Now, he is fulfilling his promises to attack the LGBT community.

People who are concerned about this threat to their own future (and mine) can submit comment letters objecting to this effort to wipe us off the National Survey of Older Americans can write to Heather.Menne@acl.hhs.gov

Overview information about this survey, which is used by local, state, and numerous Federal agencies, plus a number of non-profits, to help determine the quality of life (or existence) of America's senior citizens can be found on the Federal Register at https://www.gpo.gov/fdsys/pkg/FR-2017-03-13/pdf/2017-04882.pdf

which also claims, falsely, that there are no changes in the current form.