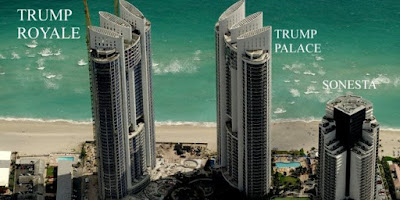 I have worked with the FBI on several occasions in the past.  All of these cases involved real estate and financial improprieties and what ultimately constituted wire fraud and receipt of illicit funds.  On one occasion I was a witness in a federal court trial and in the others, I was the real estate expert that literally gave FBI special agents and .attorneys in the U. S. Attorneys office a tutorial, if you will, on real estate transactions and who money and document recordings should be done if a transaction is above board. One of the targets received a 30 year sentence. When all else fails, often wire fraud can be the hook to take down crooked real estate players.

All of this brings me to the topic of Russian money and how it flowed into numerous Trump properties - a post from  roughly a week ago noted the almost $100 million that had flowed into Trump properties in South Florida - and how Trump associates are alleged to have been swimming in Kremlin directed monies.  As in the cases I worked on with the FBI, often the flow of monies can build a fuller picture of what is really going on and who is receiving illicit funds, often knowingly by those who viewed themselves as smarter than everyone else and above the law.  Sound like Donald Trump?  A column in the Washington Post looks at the need for the FBI and IRS to "follow the money."  Here are excerpts:

As the Watergate probe was heating up in the summer of 1973, the special prosecutor’s office gained a silent partner: the Treasury Department’s Internal Revenue Service. The Watergate scandal had engulfed the activities of corporations and corporate officials. An IRS investigation found tax violations committed with campaign contributions to the 1972 presidential campaign of Richard M. Nixon.

With information gained from the IRS, the special prosecutor’s probe resulted in 18 corporate officials and 17 corporations pleading guilty to violations of campaign contribution laws.

This week, FBI Director James B. Comey told Congress that the bureau is “investigating the nature of any links between individuals associated with the Trump campaign and the Russian government, and whether there was any coordination between the campaign and Russia’s efforts.”

Based upon what has come to light thus far, expect the FBI to be joined by Treasury’s Financial Crimes Enforcement Network and the IRS. They are the agencies best equipped to conduct financial investigations into any possible crimes dealing with or motivated by money — as in money laundering.

Case in point: The Post’s March 21 article on a Ukrainian lawmaker’s release of financial documents allegedly showing that former Trump aide Paul Manafort laundered payments from the party of an ex-leader of Ukraine with ties to Russia using accounts in Belize and Kyrgyzstan.

If the financial documents are accurate and, as alleged by Ukrainian lawmaker Serhiy Leshchenko, Manafort falsified an invoice to a Belize company to legitimize a $750,000 payment to himself, then the FBI and Treasury may come calling. . . . . Treasury agents, the Associated Press reported , have already obtained information about offshore transactions involving Manafort in connection with a federal anti-corruption investigation into his work in Eastern Europe.

The Financial Times reported in October that an investigation that it conducted had turned up evidence of ties between one Trump venture and an alleged international money-laundering network. Title deeds, bank records and correspondence showed that a Kazakh family accused of laundering hundreds of millions of dollars bought apartments in a Manhattan building part-owned by Trump and pursued business ventures with one of his partners.

Real estate provides a safe haven for overseas investors. It has few reporting requirements and is a preferred way to move cash of questionable provenance. Amid the turmoil, buyers found a dearth of available projects. Trump World Tower, opened in 2001, became a prominent depository of Russian money.”

Trump may be correct when he says he has no money in Russia and has never invested there. He can’t say, however, that Russians haven’t invested in his real estate properties.

His son Donald Jr. said no less, claiming in 2008 that Russian investments were “pouring in” to Trump’s business ventures.

So the feds must “follow the money trail” wherever it leads. Check records, bank accounts and real estate files where laundered money can ooze like water through a sponge. Who gave it, who got it, and when? Where is it now? And what was received in return?

Can federal agents under Treasury Secretary Steven Mnuchin count on Mnuchin’s defense against outside interference?

Congress strongly protected the integrity of federal investigations into Watergate. What about now?