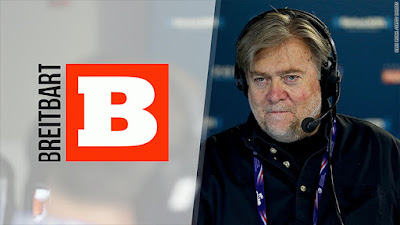 Another day and yet more news that ought to make sane Americans more upset with Republicans who are trying to cover up for Der Trumpenführer and his toxic regime.  As McClatchy reports, the FBI is investigating whether far-right "news" sites aided Russian efforts to throw the 2016 presidential election to Trump.   Given the insanity of some of these sites on a good day, there truly is no telling what these purveyors of lies and deranged conspiracy theories might have done.  The same holds true for their loyal followers.  Here are story highlights:

Operatives for Russia appear to have strategically timed the computer commands, known as “bots,” to blitz social media with links to the pro-Trump stories at times when the billionaire businessman was on the defensive in his race against Democrat Hillary Clinton, these sources said.

The bots’ end products were largely millions of Twitter and Facebook posts carrying links to stories on conservative internet sites such as Breitbart News and InfoWars, as well as on the Kremlin-backed RT News and Sputnik News, the sources said. Some of the stories were false or mixed fact and fiction, said the sources, who spoke on condition of anonymity because the bot attacks are part of an FBI-led investigation into a multifaceted Russian operation to influence last year’s elections.

Investigators examining the bot attacks are exploring whether the far-right news operations took any actions to assist Russia’s operatives.

Russia-generated bots are one piece of a cyber puzzle that counterintelligence agents have sought to solve for nearly a year to determine the extent of the Moscow government’s electronic broadside.

“This may be one of the most highly impactful information operations in the history of intelligence,” said one former U.S. intelligence official, who spoke on condition of anonymity because of the sensitivity of the matter.

Bureau director James Comey confirmed Monday at a House Intelligence Committee hearing what long has been reported: that the FBI is investigating possible links between individuals in the Trump presidential campaign and the Russian campaign to influence the election and whether there was any coordination between the two.

As for the bots, they carried links not only to news stories but also to Democratic emails posted on WikiLeaks, especially those hacked from Podesta and made public in October, said Philip Howard, a professor at the Oxford University Internet Institute who has researched the bot attacks.

Russia also used “trolls,” hundreds of computer operatives who pretended to be Trump supporters and posted stories or comments on the internet complimentary to Trump or disparaging to Clinton. Sources close to the inquiry said those operatives likely worked from a facility in St. Petersburg, Russia, dedicated to that tactic.

“Russian bots and internet trolls sought to propagate stories underground,” said Mike Carpenter, a former senior Pentagon official during the Obama administration whose job focused on Russia. “Those stories got amplified by fringe elements of our media like Breitbart.”

“They very carefully timed release of information to shift the news cycle away from stories that clearly hurt Mr. Trump, such as his inappropriate conduct over the years,” he said, referring to the October release of a video in which Trump bragged about grabbing women’s genitals. That event corresponded with a surge in bot-related traffic spreading anti-Clinton stories.

Bannon and Gorka have controversial profiles. Bannon has been accused of taking anti-immigrant and racist positions. Last week, the Jewish newspaper Forward reported that Gorka had taken a lifelong loyalty oath to a Hungarian far-right group that for decades was allied with the Nazi Party.

The White House declined to respond to questions about Gorka.

At least one of the congressional committees investigating the Russian meddling is looking into the bots.  The Senate Intelligence Committee “intends to look actively at ‘fake’ news and the ways that Russian bots and trolls were used to influence the election,” said Rachel Cohen, a spokeswoman for Sen. Mark Warner of Virginia, the panel’s ranking Democrat.