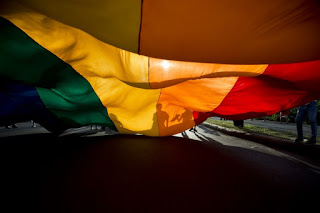 Sadly, some now former "friends" think Der Trumpenführer's assault on LGBT rights is a barrel of laughs.  In my view such individuals are little better than Germans who went along with Hitler's demonizing and later murder of Jews.  Former Republican U.S. Senator, Alan K. Simpson, a former co-chairman of the National Commission on Fiscal Responsibility and Reform, doesn't see these assaults as funny at all and makes the case how attacks on gay rights in order to appease Christofascist extremist is bad for the Republican Party as a whole.  Simpson rightly understands that while hatred of others is a mainstay of today's "conservative," most Americans do not subscribe to their poisonous belief system. He makes his case in an op=ed in the New York Times.  Here are excerpts:

During Donald Trump’s campaign, he repeatedly cast himself as a supporter of L.G.B.T. rights. As president, however, he is being urged by fringe-right groups and raging extremists to sign a “religious liberty” executive order that would allow discrimination against gays, women and religious minorities.

As one Republican to another, I’d like to offer this bit of advice to President Trump: Don’t do it.

I wish it were as simple as pointing out that supporting discrimination against anyone is just a bad idea and that doing so in the name of religion is hypocritical as well. But just for good measure, I’ll offer a few more reasons.

The prospective executive order would authorize wide-ranging, taxpayer-funded discrimination against women, gays and members of minority faiths across federal programs and services. For example, a Social Security Administration employee could cite his religious beliefs to refuse benefits to the surviving spouse of a married same-sex couple.

According to an August poll by the Public Religion Research Institute, 63 percent of Americans oppose these religious exemptions, and only 30 percent back them. The survey affirms what polling has found over the last several years: Americans are becoming more tolerant and inclusive, with support for equal rights continuing to grow. Sixty-two percent of Americans in the survey say they favor same-sex marriage, compared with 47 percent just five years ago.

Even faith leaders (400 of them) sent you a letter last month urging you not to further pursue this executive order, reasoning that, because religion is already fully protected under the law, this would then amount to something even worse: taxpayer-funded discrimination.

So, you say you aren’t afraid of political consequences, and you don’t care what other people think? Well, will you at least consider the rest of your Republican Party? You ran on its ticket.

This executive order would be a political tinderbox that could explode in the faces of Republicans everywhere, reinforcing negative stereotypes about the party’s dislike of L.G.B.T. Americans, women, and religious and ethnic minorities. It reignites a feckless debate that time and time again has forced Republicans to retreat . . .

If you still aren’t concerned about dragging the entire party into another swamp of political quicksand, then let’s focus on what you do care about: the art of the deal.

What would you get out of signing this executive order? You would placate a vocal minority that includes some certified hate groups and far-right activists who are truly out of step with most Americans and many Republicans across the country. What would the other side get — or in other words, what gifts will you be handing to Democrats and others on a silver platter? A great cause, new supporters, new energy and money, the mother’s milk of politics.

That brings us to the judiciary. It’s been a thorn in your side, I know. But based on decisions from around the country, the judiciary is just not buying the pitch that these exemptions have anything to do with “religious freedom.” Rather, it has ruled that these religious exemptions are discriminatory, plain and simple. Maybe those around you don’t care what the courts think, but wouldn’t it stick in your craw to have another embarrassing rebuke of your policies, another executive order stopped dead in its tracks?

I would respectfully suggest that you expend your time and energy on other issues — the solvency of Social Security, the cost of health care, humane immigration reform, building infrastructure and educating kids to succeed . . .

Posted by Michael-in-Norfolk at Wednesday, March 22, 2017

Email ThisBlogThis!Share to TwitterShare to FacebookShare to Pinterest
Labels: Der Trumpenführer, future of the GOP, hatred of others, myth of Christian persecution, self-centered Christofascists, special rights for Christofascists