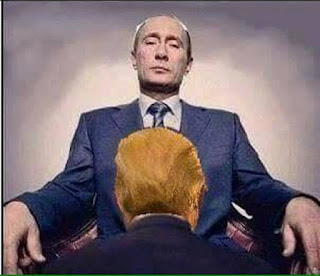 Today was NOT a good day for Der Trumpenführer!  During televised testimony the Director of the FBI and NSA both politely stated that Trump lied when he accused Barack Obama of wiretapping Trump Tower.  Worse yet, Comey confirmed that the FBI is investigating Russian efforts to influence the 2016 presidential election AND possible ties to Trump minions and surrogates.  The exact targets of the investigation were not named, but the only defense GOP apologists for Trump were left with was trying to paint leaks of information to the press as crimes.  Full coverage is here from the Washington Post.   Conservative columnist Jennifer Rubin aptly describes Trump's trashing and the idiocy of those who voted for him.  Here are excerpts:

Before FBI Director James B. Comey began his testimony before the House Intelligence Committee, President Trump was back, compulsively tweeting — and underscoring the growing perception that his allegation that President Barack Obama had Trump’s “wires tapped” is nonsensical, his attachment to reality fleeting and his concern about Russian interference in the election on his behalf is palpable.

Comey did in fact confirm that the FBI is currently investigating Russian interference with our elections, including any links with members of the Trump campaign, and whether the latter constituted any crimes. A short time later, Comey lowered the boom. What about evidence of wiretapping, as Trump claimed in tweets? Comey was succinct: “I have no information that supports those tweets.”

That testimony is not “fake.” Trump cannot change the fact that his own national intelligence team is attempting to determine whether a foreign power tried to manipulate our election. Try as he might, there is no way for Trump to discount or conceal that reality. The stone-faced Comey crisply providing definitive, unemotional testimony that was compelling, as was that of National Security Agency chief Michael S. Rogers, . . . .

To hear the head of the FBI in essence call the president a liar or wide-eyed conspiratorialist is bracing, if not humiliating, for the chief executive. And reflecting on the morning tweet, Trump now seems desperate, childish and vulnerable. He’s been tripped up by his own grandiose lies.

Perhaps now Republicans can stop treating the president’s outbursts seriously. They need to call them what they are: Wild lies and accusations designed to distract from the very real investigation into Russian attempts to throw the election his way. In just a few brief lines, Comey eviscerated whatever credibility Trump still had.

Vladimir Putin has convinced a significant chunk of the American electorate that Trump is “illegitimate.” (One poll shows 57 percent of young voters between 18 and 30 consider him “illegitimate.”) And worse, it’s convinced many Americans that our president’s word cannot be trusted.

The reality is that the man's word could never be trusted and only a fool or someone blinded by partisanship would have believed him. I hope the FBI finds collusion with Russia and that Trump ends up facing not only impeachment by conviction of treason and a sentence that puts him in prison for the rest of his foul life.  He has done immeasurable harm to this nation.
Posted by Michael-in-Norfolk at Monday, March 20, 2017