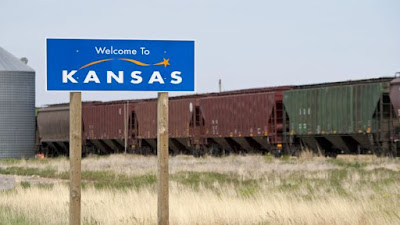 Even as Republican efforts in the House of Representatives to repeal Obamacare were crashing and burning, Kansas Republicans were taking steps to expand Medicaid under Obamacare.  Why? Because it is backed by the hospital industry and the business community and because it will aid many of Kansas' poorer citizens.  This is a sharp turn around from the Kansas GOP's agenda that cut taxes and cut funding to public education and other critical programs only to leave the state a financial basket case, proving that a "pure" GOP economic plan is the road to disaster. A piece in Mother Jones looks at this ironic approach by Kansas Republicans that is moving forward in spite of the threatened veto by nutcase GOP Gov. Sam Brownback, an architect of the state's economic and budgetary disaster.  Here are excerpts:

On the same day the House was supposed to pass a bill dismantling Medicaid, Kansas Republicans took a big step toward expanding the program in their state.

In a voice vote Thursday morning, a committee in the Kansas Senate approved legislation that would enable the state to take advantage of an Obamacare provision offering Medicaid health insurance coverage to a wider group of poor people. The federal government would provide the vast majority of the funding.

Many deep-red states like Kansas have rejected Medicaid expansion based largely on their ideological objections to Obamacare. But as I reported earlier this week, a new bloc of moderate Republicans in the state—backed by the health care industry and business community—have teamed up with Democrats to push Medicaid expansion. They point out that the state has given up, to date, nearly $2 billion in federal funds that could have helped both improve the health of the state's low-income communities while also boosting its economy.

The Kansas House overwhelming passed Medicaid expansion earlier this year. The full state Senate is expected to vote on the issue Monday, according to KCUR. But they would likely need to cobble together a veto-proof majority, since Gov. Sam Brownback (R) has vocally opposed to adopting the program.


More coverage on this development is here at Mother Jones:


According to a study by the nonpartisan Kansas Health Institute, about 152,000 people would join KanCare, the state's Medicaid program, if Kansas adopted the ACA expansion. Roughly 80,000 of those people currently lack health insurance coverage, while 71,000 would ditch their current coverage to jump onto Medicaid.

Now, Eplee has joined a coalition of moderate Republicans and Democrats that is trying to make that happen. They want their state to accept everything Obamacare has to offer before their brethren at the national level can tear it apart—and they've got the state business and medical communities on their side. Voters agree, too, with 82 percent supporting Medicaid expansion in a poll sponsored by the American Cancer Society Cancer Action Network.

"I'm out here in the rural area practicing [medicine], and I see it every day," Eplee says. "When I gave my testimony [in favor of Medicaid expansion], I gave examples of the working poor and their inability to get health insurance and to get the help they need. It puts them in very dire, precarious financial situations of being made medically bankrupt by one illness or one disease. It just takes one event, and then they're wiped out financially."

When the Kansas House collected testimony on the issue earlier this year, more than 160 organizations and individuals supported expansion. Just four offered testimony that opposed the idea—mostly national conservative organizations.

Koesten was part of a group of moderate Republicans that last year reclaimed control of the state legislature from the far right of the party. Five years earlier, Republican Gov. Sam Brownback had waged an electoral war to purge the party of legislators who opposed his ambitious tax cuts, ushering in a conservative takeover executed with the help of the Koch brothers' organization Americans for Prosperity. But after Brownback's policies left an enormous hole in the state budget, the moderates roared back in the 2016 elections. Moderate Republicans primaried sitting conservatives, and Democrats knocked off others. Out of 165 total lawmakers in the state Senate and House, there are 49 new members this year.

The consequences became clear late last month, when the state House voted 81-44 in favor of Medicaid expansion. "There was just enough change in the primary and the general election that tweaked the control over to the moderate side, where this was unstoppable at this point in time," explains Robert St. Peter, president and CEO of the Kansas Health Institute.

The hospitals have good reason to be upset about the money the state is leaving on the table. Many hospitals, especially in rural parts of the state, are under increasing financial strain from treating uninsured patients. In 2015, Mercy Hospital in Independence, Kansas, closed. Independence has just 9,500 residents, but the closure attracted media coverage from around the state. . . . an industry advisory group, found that out of 107 rural hospitals in Kansas, 31 are considered "vulnerable" and at risk of closure. The report didn't name the hospitals in trouble, leaving each community worried that its hospital could be next.


Kansas is one of the last places one would expect to see Republicans regaining a grasp on objective reality and actually pushing policies that help poorer citizens.  It is the exact opposite of Paul Ryan's reverse Robin Hood agenda.
Posted by Michael-in-Norfolk at Saturday, March 25, 2017