There’s a Smell of Treason in the Air 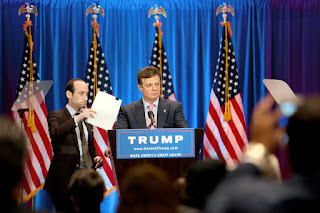 I make no bones about it:  I despise Donald Trump and believe that he is unfit to occupy the White House.  I'd go even further and state that he is unfit for polite and decent society.  He is a crude, self-absorbed narcissist who cares nothing about anything but himself and own aggrandizement.  If the choice before him was satiating his own ego and throwing his children under the bus, his kids would merit less than a moments thought.  Add to this moral bankruptcy, Trump's long history of ignoring the law and connections with Mafia figures and sleazy Russian mafia characters, is there really a question as to whether or not he'd commit treason to benefit himself?  I think not.  The issue before America now is whether a true, independent investigation will be done to ferret out possible treason by Trump and his henchmen.  Re. Devin Nunes made it clear yesterday that he is doing all that he can to sabotage such and investigation by the House Intelligence Committee.  A column in the New York Times looks at the disturbing situation and the need for Nunes' removal from his position on the investigating committee.  Here are highlights:

[T]he F.B.I. confirms that we have had an investigation underway for eight months into whether another presidential campaign colluded with a foreign power so as to win an election. To me, that, too, would amount to treason.

I’ve been speaking to intelligence experts, Americans and foreigners alike, and they mostly (but not entirely) believe there was Trump-Russia cooperation of some kind. But this is uncertain; it’s prudent to note that James Clapper, the intelligence director under Barack Obama, said that as of January he had seen no evidence of collusion but that he favors an investigation to get to the bottom of it.

I’m also told (not by a Democrat!) that there’s a persuasive piece of intelligence on ties between Russia and a member of the Trump team that isn’t yet public.

A bit of conjecture:  The Russians for years had influence over Donald Trump because of their investments with him, and he was by nature inclined to admire Vladimir Putin as a strongman ruler. Meanwhile, Trump had in his orbit a number of people with Moscow ties, including Paul Manafort, who practically bleeds borscht.

As The A.P. puts it, Manafort offered to “influence politics, business dealings and news coverage inside the United States, Europe and the former Soviet republics to benefit the Putin government.” (Manafort told The A.P. that his work was being falsely portrayed as nefarious.)

At some point, I suspect, members of the Trump team gained knowledge of Russian hacking into Clinton emails, which would explain why Trump friend Roger Stone tweeted things like “Trust me, it will soon the Podesta’s time in the barrel.”

This kind of soft collusion, evolving over the course of the campaign without a clear quid pro quo, might also explain why there weren’t greater efforts to hide the Trump team’s ties to Russia, or to camouflage its softening of the Republican Party platform position toward Moscow.

One crucial unknown: Did Russia try to funnel money into Trump’s campaign coffers? In European elections, Russia has regularly tried to influence results by providing secret funds. I’m sure the F.B.I. is looking into whether there were suspicious financial transfers.

The White House is already distancing itself from Manafort, claiming that he played only a “very limited role” in the campaign — even though he was Trump’s campaign chairman!

Treason isn’t necessarily spelled out as a quid pro quo, and it wasn’t when Nixon tried to sink the Vietnam peace initiative in 1968.

In the past, as when foreign funds made their way into Bill Clinton’s 1996 re-election campaign, Republicans showed intense interest in foreign interference in the political process. So it’s sad to see some Republicans (I mean you, Devin Nunes!) trying to hijack today’s House investigation to make it about leaks.

Really? Our country was attacked by Russia, and you’re obsessed with leaks? Do you honestly think that the culprit in Watergate wasn’t Nixon but the famed leaker Deep Throat? Republicans should replace Nunes as head of the House Intelligence Committee; he can’t simultaneously be Trump’s advocate and his investigator.

[T]he crucial question is as monumental as it is simple: Was there treason? . . . the issue cries out for a careful, public and bipartisan investigation by an independent commission.

“There’s a smell of treason in the air,” Douglas Brinkley, the historian, told The Washington Post. He’s right, and we must dispel that stench.