Call Evangelicals What They Are: The American Taliban 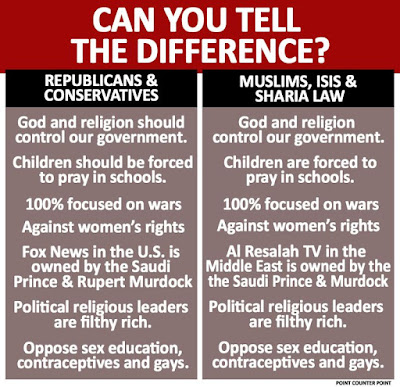 Having been raised Catholic in the 1950's and early 1960's, I know all about religious demands to follow dictated church doctrine in an unthinking, lemming like mentality.  Yet, in some ways, Catholicism was and is more friendly to science and knowledge that is the case with white fundamentalist Protestant Christianity, especially in the South where religion merged with white efforts to maintain segregation and white privilege.  Sadly, this mindset of keeping others down and imposing a sense of the "other" on those who are different continues undiminished among the so-called leaders of fundamentalist and evangelicals.  Indeed, for LGBT Americans, these same elements have largely adopted Nazi anti-Jewish propaganda and merely exchanged the word "gay" for "Jew."  Having witnessed the beginning of the rise of fundamentalists and evangelicals in the Republican Party, it is safe to say that their are few more self-centered and filled with contempt for other than these "godly Christians."  A piece I book marked a while back makes the case that these people are little different from Islamic extremists.  Here are highlights:

“The Council For National Policy” is a Conservative Think Tank, made up of a who’s who of prominent conservatives; Rick Santorum, Mike Huckabee, Reince Priebus, Tim LaHaye, Bobby Jindal, John McCain… the list goes on…

This article, published by the Washington Post, but reported elsewhere, lays out the group’s plan to “restore education in America,” by bringing god into classrooms.

I have said for years and years, the Christian Right is really seeking to establish a theocracy in the United States — at least regionally, throughout the deep south. And this latest effort by the “Council for National Policy” lays further proof to that claim.

The Constitution strictly prohibits the establishment of Religion, as part of the First Amendment, which also guarantees Freedom of Speech and Freedom of the Press. The purpose of this “Separation of Church and State” is intended to do two things:
1. It protects religious freedom for everyone.
2. It prevents the tyranny of any one religion.

But this fact won’t stop many southern christians, who feel it is their duty — as christians — to make the United States “a godly nation” in their eyes.

I grew up in this world, so I know what I’m talking about. . . . . Trust me. I’ve been there. Fortunately, I had the sense to give it up. By age 15, at the peak of my adolescent sexual curiosity, I realized that any religion that demanded giving up my basic humanity was nuts.

Of course, not all christian evangelicals share this extreme view. Nevertheless, the extremists always give themselves away with their trademark refrain, “I’ll pray for you,” as if you are possessed by demons and in need of an exorcism. They seem completely unaware of how this statement makes them appear; that they alone understand “truth,” that everyone else is “ungodly” and in need of “redemption,” as they see it; by being “born again,” and baptized, and accepting their world view. This self-righteous arrogant presumption is at the root of all religious extremism.

Evangelicals in churches and state houses across the country support laws and political systems that brutalize and imprison MILLIONS of African Americans, that deny equal rights and protections to LGBT people and tacitly support violence toward them, and seek to deny women the right to govern their own bodies, often with threats or outright acts of physical violence. They seem hell-bent on ejecting science from education and replacing it with their own creationist ideas.

In doing these things, evangelicals are advocating a religious extremism that is no different from muslim extremism, which projects religious authority over all people in their domain, which limits the rights of women, controls and limits education, and enforces strict adherence to a moral code, which naturally rejects and punishes all forms of “decadence,” including; “deviant sexuality,” science, reason, and any questioning of authority. Christian fundamentalists, if given the power, will do the same things.

Evangelical christians in the United States condemn muslim extremism as a threat to the country and their way of life, while clearly endorsing their own form of extreme religious authoritarianism. This form of religion establishes a tribally divisive “us” versus “them” mentality, which places “our” rights and prerogatives above the needs of any other group. And it’s used repeatedly as the basis for denying other people’s rights — particularly their freedom to choose and even their right to exist.

Religious extremism is religious extremism. Using words like “righteousness” or “faith” or “Christ-given mission,” and hiding behind ideas like “tradition” and “heritage” and “family values” won’t cover up this fact.

I do not suggest that evangelicals should give up their faith. But I strongly suggest they should not trample on other people’s religious beliefs, or insist that people should conform themselves with the evangelical worldview.

If evangelicals hate tyranny, they should be very wary of becoming tyrants.  . . . . over the decades they have increasingly reached for more and more political power to achieve this goal. This is exactly what ISIS proposes, by trying to establish a global muslim caliphate. The goal of religious extremists, regardless of faith, is always the same: Dominion.

Evangelicals are The American Taliban.

The "First Amendment Defense Act" now pending in Congress is a perfect example of this phenomenon and mindset.
Posted by Michael-in-Norfolk at Sunday, March 19, 2017