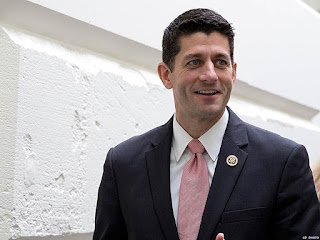 With the GOP proposal to repeal and "replace" Obamacare, we are seeing a shining example of the lies and hypocrisy of Paul Ryan that one can hope will once and for all expose the cruelty and meanness of the man and his party.  One can also hope that the train wreck that is Ryancare or Trumpcare (whichever label you prefer) will finally get the mainstream media to stop its game of false equivalency once and for all.  The sad reality is that one political party holds the poor, minorities, and the middle class in contempt and the other does not. One political party wants to loot the nation to benefit the wealthy and the other does not. Yet inexplicably, the media has acted as if GOP proposals - and GOP elected officials - need to be treated as if they were serious and something other than what they are: an effort to give lavish tax cuts to the wealthy and corporations while gutting programs that serve the majority of citizens and removing regulations that protect the public safety and the environment.  A column in the New York Times looks at the falsity of Paul Ryan and the irresponsible media that has contributed to the debacle that has overcome the nation.  Here are excerpts:

Many people are horrified, and rightly so, by what passes for leadership in today’s Washington. And it’s important to keep the horror of our political situation up front, to keep highlighting the lies, the cruelty, the bad judgment. We must never normalize the state we’re in.

At the same time, however, we should be asking ourselves how the people running our government came to wield such power. How, in particular, did a man whose fraudulence, lack of concern for those he claims to care about and lack of policy coherence should have been obvious to everyone nonetheless manage to win over so many gullible souls?

No, this isn’t a column about whatshisname, the guy on Twitter, who’s getting plenty of attention. It’s about Paul Ryan, the speaker of the House.

Whatever happens in the House and the Senate, however, there’s no question that the A.H.C.A. is one of the worst bills ever presented to Congress.

It would deprive tens of millions of health insurance — the decline in the number of insured Americans would be larger than what would result from simple repeal of Obamacare! — while sharply raising expenses for many of those who remain. It would be especially punitive for lower-income, older, rural voters.

In return, we would get a small reduction in the budget deficit. Oh, and a tax cut, perhaps as much as $1 trillion, for the wealthy.

This is terrible stuff. It’s made worse by the lies Mr. Ryan has been telling about his plan.
He claims that it would lower premiums; it would actually increase them. He claims that it would end the Obamacare death spiral; there isn’t a death spiral, and his plan would be more, not less, vulnerable to a vicious circle of rising premiums and falling enrollment.
Some people seem startled both by the awfulness of Mr. Ryan’s plan and by the raw dishonesty of his sales pitch. But why? Everything we’ve seen from Mr. Ryan amid the health care debacle — everything, that is, except the press coverage — has been completely consistent with his previous career. That is, he’s still the same guy I wrote about back in 2010, in a column titled “The Flimflam Man.” . . . all of these proposals share a family resemblance: Like his health plan, each involved savage cuts in benefits for the poor and working class, with the money released by these cuts used to offset large tax cuts for the rich. All were, however, sold on false pretenses as plans for deficit reduction.

So how did Mr. Ryan reach a position where his actions may reshape the lives of so many of his fellow citizens, in most cases very much for the worse? The answer lies in the impenetrable gullibility of his base. No, not his constituents: the news media, who made him what he is.

You see, until very recently both news coverage and political punditry were dominated by the convention of “balance.” This meant, in particular, that when it came to policy debates one was always supposed to present both sides as having equally well-founded arguments. And this in turn meant that it was necessary to point to serious, honest, knowledgeable proponents of conservative positions.

Now, however, the flimflam has hit a wall. Mr. Ryan used to be able to game the Congressional Budget Office, getting it to produce reports that looked to the unwary like proper scores of his plans, but weren’t. This time, however, he couldn’t pull it off: The C.B.O. told the devastating truth about his plan, and his evasions and lies were too obvious to ignore.

This false symmetry — downplaying the awfulness of some candidates, vastly exaggerating the flaws of their opponents — isn’t the only reason America is in the mess it’s in. But it’s an important part of the story. And now we’re all about to pay the price.