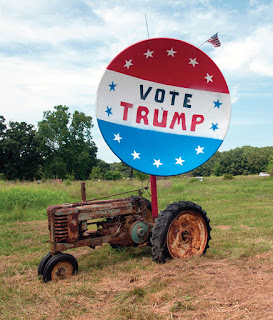 Some Democrats and liberals are whining and contemplating their navels as they seek ways to "understand" poor and working class whites who voted for Donald Trump so as to win them back over to supporting Democrat/liberal policies.  I am decidedly not a member of that group.  Perhaps it's because in many ways I remain a conservative and support the concepts of personal responsibility and that actions - or in this case votes - have consequences.  In my view, poor whites and working class whites fell prey to their racism, religious extremism and desire to blame others for their failed state in life while never facing the reality that their own bad choices, embrace of ignorance and bigotry were in fact the root cause of many of their current ills. To these folks, sexual orientation is a "choice" but somehow abusing drugs and alcohol and dropping out of school are not a choice. In short, I find it difficult to have zero sympathy for such folks (although I do worry about their children) and hope they suffer greatly for the consequences of their misguided votes.  A piece in New York Magazine makes the case that rather than trying to be "understanding" Democrats and liberals need to see these people for what they are: deplorables who cannot be reached. .  Here are  excerpts:

On the morning after, traumatized liberals set out hunting for answers as if Election Day were 9/11 all over again. The ubiquitous question of 15 years earlier — “Why do they hate us?” — was repurposed for Donald Trump’s demolition of the political order. Why did white working-class voters reject Hillary Clinton and the Democrats? Why did they fall for a billionaire con man? Why do they hate us?

There were, of course, many other culprits in the election’s outcome. Comey, the Kremlin, the cable-news networks that beamed Trump 24/7, Jill Stein, a Clinton campaign that (among other blunders) ignored frantic on-the-ground pleas for help in Wisconsin and Michigan, and the candidate herself have all come in for deserved public flogging. But the attitude among some liberals toward the actual voters who pulled the trigger on Election Day has been more indulgent, equivocal, and forgiving. Perhaps those white voters without a college degree who preferred Trump by 39 percentage points — the most lopsided margin in the sector pollsters define as “white working class” since the 1980 Ronald Reagan landslide — are not “deplorables” who “cling to guns and religion” after all.

While many, if not most, of those in #TheResistance of the Democratic base remain furious at these voters, the party’s political class and the liberal media Establishment are making a concerted effort to convert that rage into empathy.

But for those of us who want to bring down the curtain on the Trump era as quickly as possible, this pandering to his voters raises a more immediate and practical concern: Is it a worthwhile political tactic that will actually help reverse Republican rule? Or is it another counterproductive detour into liberal guilt, self-flagellation, and political correctness of the sort that helped blind Democrats to the gravity of the Trump threat in the first place?

After the debacle of 2016, might the time have at last come for Democrats to weaponize their anger instead of swallowing it? Instead of studying how to talk to “real people,” might they start talking like real people? No more reading from wimpy scripts concocted by consultants and focus groups. . . . . Say in public what you say in private, even at the risk of pissing people off, including those in your own party. Better late than never to learn the lessons of Trump’s triumphant primary campaign that the Clinton campaign foolishly ignored.

This is a separate matter from the substantive question of whether the party is overdue in addressing the needs of the 21st-century middle class, or what remains of it. The answer to that is yes, as a matter of morality, policy, and politics.  . . . . But it’s one thing for the Democratic Party to drain its own swamp of special interests and another for it to waste time and energy chasing unreachable voters in the base of Trump’s electorate. For all her failings, Clinton received 3 million more votes than Trump and lost the Electoral College by the mere 77,744 votes that cost her the previously blue states of Michigan (which she lost by .2 of a percentage point), Wisconsin (.8 point), and Pennsylvania (.7 point).

[T]he Trump vote is overwhelmingly synonymous with the Republican Party as a whole. . . . That makes it all the more a fool’s errand for Democrats to fudge or abandon their own values to cater to the white-identity politics of the hard-core, often self-sabotaging Trump voters who helped drive the country into a ditch on Election Day. They will stick with him even though the numbers say that they will take a bigger financial hit than Clinton voters under the Republican health-care plan.

The toughest critics of white blue-collar Trump voters are conservatives. Witness Kevin D. Williamson, who skewered “the white working class’s descent into dysfunction” in National Review as Trump was piling up his victories in the GOP primaries last March. Raised in working-class West Texas, Williamson had no interest in emulating the efforts of coastal liberals to scale empathy walls. Instead, he condemns Trump voters for being “in thrall to a vicious, selfish culture whose main products are misery and used heroin needles.” He chastises them for embracing victimhood by blaming their plight on “outside forces” like globalization, the Establishment, China, Washington, immigrants — and “the Man” who “closed the factories down.” He concludes: “Donald Trump’s speeches make them feel good. So does OxyContin.”

The conservative contempt for Trump voters — omnipresent among the party’s Establishment until the Election Day results persuaded all but the most adamant NeverTrumpers to fall into line — would seem to give the Democrats a big opening to win them over.

There’s zero evidence that they will. The dug-in Trump base shows no signs of varying its exclusive diet of right-wing media telling it that anyone who contradicts Trump, Rush, or Breitbart is peddling “fake news.”

There’s no way liberals can counter these voters’ blind faith in a huckster who’s sold them this snake oil. The notion that they can be won over by some sort of new New Deal — “domestic programs that would benefit everyone (like national health insurance),” as Mark Lilla puts it — is wishful thinking. These voters are so adamantly opposed to government programs that in some cases they refuse to accept the fact that aid they already receive comes from Washington — witness the “Keep Government Out of My Medicare!” placards at the early tea-party protests.

Perhaps it’s a smarter idea to just let the GOP own these intractable voters. Liberals looking for a way to empathize with conservatives should endorse the core conservative belief in the importance of personal responsibility. Let Trump’s white working-class base take responsibility for its own votes — or in some cases failure to vote — and live with the election’s consequences.

So hold the empathy and hold on to the anger.