How Trump Will Betray the Coal Industry and Miners 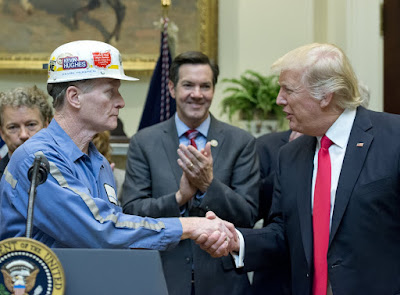 Perhaps no one well for Der Trumpenführer's lies more completely than those dependent on the coal industry, especially in areas like Kentucky, West Virginia and parts of Southwest Virginia.  Between appeals to racism, white nationalism and toxic right wing religion, voters in these areas voted for Trump and Republicans that now push budget cuts that will hit these regions harder than many others.  Meanwhile, promises to bring the coal industry back to its glory days - which in truth, were not all that good for average coal industry workers - will likely turn out to be nothing more than promises of a carnival barker.  Between Trump's broken promises (assuming he meant anything he said) and a reactionary culture that makes these regions unattractive for modern progressive businesses, the economic future remains bleak with further pain to come from the policies of politicians that these regions put into office.  A piece in the Washington Post looks at the coming betrayal of those who voted out of hatred and an unwillingness to move toward the future and who continue to look backwards.  Here are highlights:

[T]he prognosis for Big Coal remains dim. . . . . President Trump has vowed to roll back environmental regulations that the industry says are part of a “war on coal.”

The stocks of coal companies have enjoyed a “Trump bump,” thanks to the president’s pledges to “bring the coal industry back” and “put our great miners and steelworkers back to work.” Half a dozen big companies have seized the moment to issue stock or sell bonds to raise money from investors willing to wager on the effects of a friendlier Trump administration. Peabody Energy, the nation’s biggest coal behemoth, hopes to win court approval to come out of bankruptcy in April.

But the obstacles on the other side of the ledger remain daunting: Coal-fired power plants continue to shut their doors. Bountiful supplies of U.S. shale gas are keeping natural gas prices low and competitive, and renewable sources of power generation are growing rapidly. Though most experts expect U.S. coal sales and output to top last year’s levels, they also expect the decline to resume in 2018.

“The coal industry is saying it’s back. It’s not back,” said Tom Sanzillo, director of finance at the Institute for Energy Economics & Financial Analysis. “This is a fool’s errand.” . . . . . Some coal companies will survive, and some could thrive. Metallurgical coal will be needed to make steel in India and China and in the United States, especially if there is a boost in infrastructure spending. And thermal coal will still be used to generate electricity for years, even if at lower rates.

But to show profits, coal operators will have to trim output from the oldest, least-efficient mines in Appalachia (where Trump garnered crucial votes in the election) and shift their focus to the Illinois Basin and the Powder River Basin in Wyoming.

“A lot of people conflate two primary things: the coal industry and coal jobs,” said Chiza B. Vitta, a coal analyst at Standard & Poor’s. “Even if the coal industry were to do better, that doesn’t translate into coal jobs. Over time the process has become more and more efficient, and they’re able to mine with fewer and fewer people working.”  Some analysts don’t even expect the industry to do better.

“The regulatory environment for coal should improve under Trump’s presidency,” the bank [CitiBank] said. But, it added, “comparative economics for coal, renewables and gas place clean coal firmly at the bottom of the stack in the U.S.”

[I]t will be hard for Trump to deliver. “To bring jobs back in Kentucky is a tough proposition unless there’s a subsidy, because it doesn’t make economic sense,” Vitta said.  That’s been true for years, notwithstanding some of the political rhetoric.

In Arizona, the Navajo Generating Station could also provide an early test for the president. Its owners have decided to close the massive coal plant. . . . . . the Navajo station produces electricity at rates about 50 percent higher than market rates.

“There’s no good economic reason to keep NGS on life support, and indeed the time for closure has come,” Sanzillo’s group said in a blog post. “The plant is emblematic of a core challenge facing the traditionally hidebound U.S. electricity-generation industry, as the market for coal-fired electricity is shrinking.”  And, he added, “that’s regardless of recent political events.”

The take away?  Coal jobs will not return in these regions and the Trump/GOP budget will be savage to the residents of these areas who were basically played for fools and stupidly aided their own long term economic destruction.  Meanwhile, do not expect any progressive changes that will bring new, forward thinking businesses ot that will stop the flight of the most able younger generations to places that are the opposite of their home regions. The embrace of ignorance - think conservative Christianity - and bigotry carry a high price.
Posted by Michael-in-Norfolk at Sunday, March 19, 2017

Very chilling, this "Council." Daily Kos has reported the both Steve Bannon and Kellyanne Conway are members, and Conway is or was on its governing Board. Dominionists running the White House - how scary is that. I don't know why Maddow et al aren't all over that.

On a happier note, Michael, I'm so glad to know you're enjoying yourself in Key West. Beautiful sunset pics.