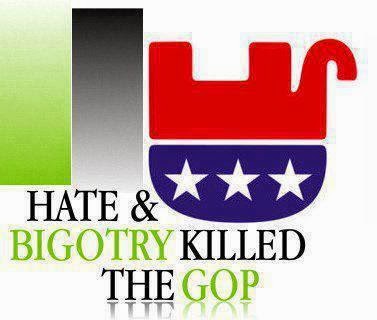 The Millenials are walking away from religion in droves, the GOP's anti-gay policies are alienating voters and much of corporate America, the GOP's anti-immigrant agenda is driving away Hispanic voters, and the GOP base of aging, racist, homophobic white voters is dwindling, yet House Majority Whip Steve Scalise is pontificating that doubling down on "conservationism" - read more racist, homophobic anti-Hispanic batshitery - is the solution for the GOP's woes.  Yes, the same Steve Scalise who has major white supremacist baggage of his own.  One has to wonder whether Scalise suffers from major head trauma or is merely drinking far too much Kool-Aid.   A piece in Politico looks at Scalise's apparent insanity.   Here are highlights:

The Louisiana Republican is hoping the party avoids nominating a moderate in 2016, noting that candidates from the GOP’s center have failed to win the White House during the last two elections. Scalise thinks this is a mistake, and he wants to avoid picking a standard bearer who isn’t a true conservative.

“You know, I’d argue we’ve had moderates nominated the last few times and they haven’t won,” he said. “Show me the last time a conservative has lost the presidency. I think if we have a strong conservative with a proven record, we’ll win the White House.”

Scalise’s sit-down with POLITICO is a kind a reemergence after several trying months for the Louisiana Republican. He’s kept a low profile for the early part of 2015, after it was revealed that he once attended a meeting organized by a white supremacist in Louisiana.

Scalise had avoided most on-the-record interactions with the press since a liberal blogger revealed in December that he made a 2002 appearance before the European-American Unity and Rights Organization (EURO), an extremist group founded by former Ku Klux Klan leader David Duke.

Scalise seemingly has learned nothing and what is frightening is that he is the number 2 figure in the House of Representatives.
Posted by Michael-in-Norfolk at Tuesday, March 31, 2015

I don't understand the GOP kowtowing to a dwindling base with a very limited social interests plank. At this rate they are going to age themselves out of a viable party. Tis past time for politics to swing back to the center for the majority of the candidates.