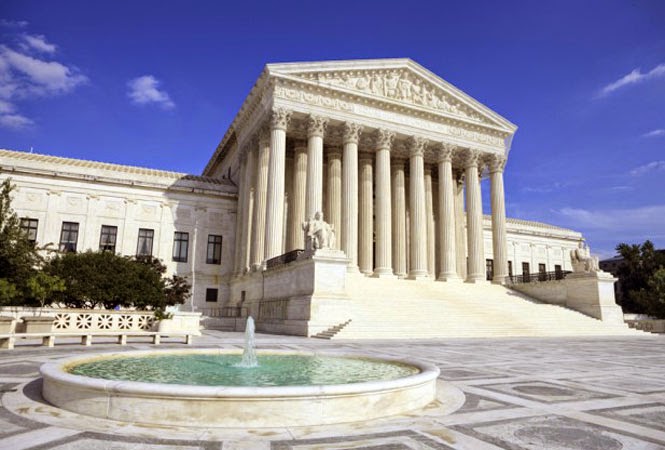 The four states in the 6th Circuit defending their anti-gay state bans on same sex marriage - Michigan, Kentucky, Ohio, and Tennessee - have filed their briefs with the U.S. Supreme Court, and not surprisingly, they present nothing new and merely a rehash of the same bullshit that we've seen time and time again and make arguments ranging from (i) that of majority mob rule should determine minority rights, (ii) the bans are needed to promote responsible heterosexual procreation,  to (iii) the claim that the bans do not discriminate since no one is barred from marriage as long as its a heterosexual marriage. Of these arguments, I wonder how long these blowhards will sing the song when Christians become a minority in America. Personally, it would be sweet justice to have their rights put to popular vote.  BuzzFeed looks at the tired efforts to justify animus inspired bigotry.  Here are excerpts:

In Ohio, where the state’s law and amendment banning recognition of same-sex couples’ marriages granted elsewhere are being challenged, Attorney General Mike DeWine’s office filed a brief arguing that the marriage issue is best left to the “democratic process” — an argument that formed a significant portion of the appeals court decision upholding the four states’ bans.

Specifically, the brief argues, the Supreme Court’s decision striking down the Defense of Marriage Act’s federal recognition ban “best shows that this issue belongs with communities for collaborative resolution through vibrant democratic debate and consensus.”

Tennessee Attorney General Herbert Slatery defended his state’s recognition ban on far more direct grounds.  “Ultimately, Tennessee is not required to recognize petitioners’ out-of-state same-sex marriages because its own marriage policy is indeed legitimate,” the state’s lawyers write. “Marriage cannot be separated from its procreative purpose, and the inherently procreative capacity of opposite-sex couples cannot be denied. Maintaining a traditional definition of marriage ensures that when couples procreate, the children will be born into a stable family unit, and the promotion of family stability is certainly a legitimate state interest.”

Kentucky Gov. Steve Beshear . . . argues that “Kentucky’s marriage statutes and constitutional amendment did not change the law in Kentucky. The laws reflect what has always been the law in the Commonwealth of Kentucky and the consensus of Kentucky communities – only traditional man-woman marriages will be licensed or recognized.”

In short, it's the same list of tired arguments that the majority of the Court found unconvincing in United States v. Windsor.
Posted by Michael-in-Norfolk at Sunday, March 29, 2015