The Lies and Legal Gymnastics of Gay Marriage Opponents 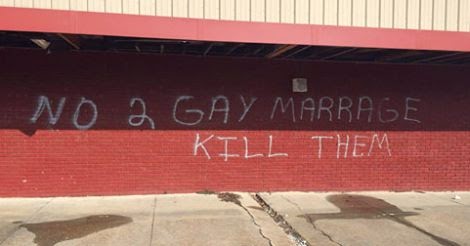 As the Christofascists and their political lackeys have steadily been losing the war over same sex marriage, the lies and farcical arguments that they have put forth to justify animus based bans on gay marriage have become increasingly incredible.  Indeed, one could argue that the attorneys signing briefs and pleadings ought to face sanctions for their far less than honest claims and arguments (in many states, by signing court filings, attorneys vouch for their truth and veracity).  In short, legal counsel for the anti-gay faction have becomes as big of liars as the "godly folk" who think any and every lie is justified if it furthers their agenda of hate and division.  A column in the Washington Post looks at this phenomenon.  Here are highlights:

Gay-marriage bans don’t discriminate against gays because they apply to heterosexual people, too.

At least, that’s what Kentucky is arguing — apparently with a (ahem) straight face — to the Supreme Court. This and other Onion-worthy arguments illustrate how desperate gay-marriage opponents have become, and how nakedly their logic now mirrors that used to justify the bigoted anti-miscegenation laws struck down a half-century ago.

In most states, conservatives realize they’ve basically lost the war against gay marriage, both in the court of public opinion and the literal court of law. . . . . . That’s why many opponents to gay marriage see “religious freedom” laws, such as the one now igniting a firestorm in Indiana, as the last remaining policy tool available to them.

But in a large chunk of the country, gay marriage is not quite a fait accompli. On April 28, the Supreme Court will hear cases from Kentucky, Michigan, Ohio and Tennessee relating to both bans on same-sex marriage and refusals to recognize such marriages performed in other states. The justices’ reaction to these cases is expected to finally, formally determine whether gay marriage must be legal in all 50 states.

States have thus been forced to get more creative about how they justify their remaining marital prohibitions and how they can plausibly claim that their knee-jerk restrictions on matrimony, which the court has repeatedly called a “fundamental right,” don’t violate the equal protection clause of the Constitution.

And so we arrive at Kentucky’s legalistic gymnastics. . . . . the Bluegrass State’s Democratic governor argued that gays are not being discriminated against because they’re still allowed to get married — so long as they disregard whom they’re sexually attracted to.

Kentucky’s argument closely resembles one used, and rejected, in a landmark Supreme Court case about marriage restrictions: Loving v. Virginia, decided in 1967. Virginia presented similar logic as to why its law banning interracial marriage — like those then on the books in 15 other states, including Kentucky — was not discriminatory. Both blacks and whites were allowed to marry inside their race, after all, and both were equally punished for marrying outside of it. The court didn’t buy it.

These and other arguments contained in the four states’ briefs often imply that gay men and lesbians can ignore and switch their sexual orientation at will, despite the scientific community’s consensus to the contrary. In the absence of the ability to legally marry, the states suggest, gay couples will simply shrug, break up and decide to procreatively pair up with a member of the opposite sex instead. This scenario is almost funny, in a sitcom-y sort of way. Or at least it would be, if so many loving couples’ fates didn’t hang in the balance.