Tom Cotton and the Republican/Christofascist Cavalcade of Hate 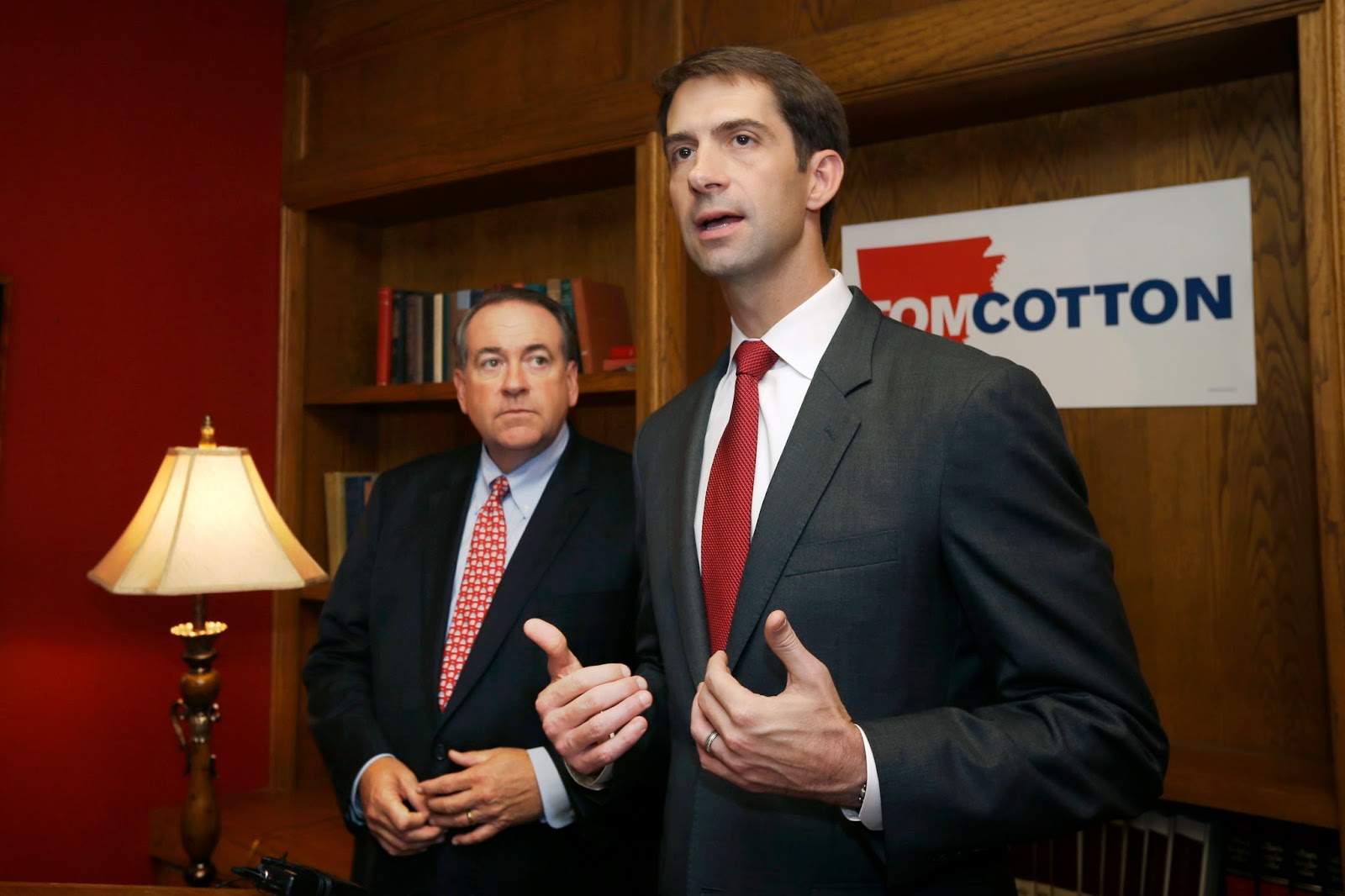 One aspect of the controversy over the "license to discriminate laws" being pushed by the Christofascists and their political whores in the Republican Party is that perhaps at last the general public and self-loathing gays who still vote Republican may finally understand just how foul the Republican Party and the "godly folk" have become.  Leading the charge of hate and loathing is GOP Senator Tom Cotton of Arkansas who stated that gays needed to "get some perspective" and realize that discrimination should impliedly be acceptable since we are being executed as in Iran.  Meanwhile, after the Indiana GOP and Mike Pence have hurriedly enacted a "fix" to Indiana's "religious freedom restoration act," the godly folk have been spewing anti-gay hate and attacking the businesses that condemned Indiana's foul legislation.  First, here are highlights from The New Civil Rights Movement on Tom Cotton's unbelievable statement:

Freshman Republican U.S. Senator from Arkansas, Tom Cotton, made headlines recently when he convinced 46 of his GOP colleagues to sign an open letter to the leaders of Iran, essentially denouncing President Barack Obama and his attempts to secure a nuclear deal.   That of course ended disastrously for the GOP.

Now, Sen. Cotton is making headlines again, this time for telling gay people they're lucky to be alive.  "I think it’s important we have a sense of perspective about our priorities,” Sen. Cotton told CNN's Wolf Blitzer Wednesday. "In Iran, they hang you for the crime of being gay."

Think Progress, which first reported on the story, notes that "While Cotton is correct that LGBT people in America are not routinely executed, violence against LGBT Americans remains a significant problem."

Cotton, in his Iran comment, seemingly only stated what the "godly folk" would like to do to gays.   Fanning the flames of hate are some of the usual suspects from "Christian" organizations.  Meanwhile, others in the GOP piled on.  Here is a sampling:

Mike Huckabee:  Huckabee told FRC president Tony Perkins, the host of the program, that the gay community has turned the controversies surrounding “religious freedom” legislation in Arkansas and Indiana into a “phony crisis.”

Perkins contended that gay people who are denied service by a business should simply try to find another shop that will serve them rather than filing a lawsuit against discriminatory business owners. “Where will it stop?” he asked Huckabee.


Mat Staver: Mat Staver once again compared gay rights advocates to terrorists, telling WND radio host Greg Corombos that the LGBT community won’t stop until it wins a “special, protected, preferred status for homosexuality” and “then if they get that, boy are they going to come and hammer you hard with it.”

“Their agenda doesn’t stop until they are completely dominating anybody who ultimately does not not only agree but promote and affirm their lifestyle,” Staver said. “Their agenda will not stop, it will ultimately result in fines and prosecution. This is an intolerant agenda.” He went on to liken gay rights supporters to the Hamas terrorists.

Pat Robertson: Hampton Roads' own village idiot again shot off his mouth to the embarrassment of the entire region:.   Pat Robertson repeated his criticism of the gay community in the wake of the controversy surrounding a new Indiana law which gives businesses the right to deny service to LGBT customers, among others.

There are many more chilling and/or insane quotes.  The take away?  There is little wonder that 33% of Millennials have walked away from religion.  Frankly, I cannot blame them.  It is far, far past time that religious belief and the "godly folk" cease to be afforded any deference whatsoever.