It Is Time to Retire Del. Bob Marshall 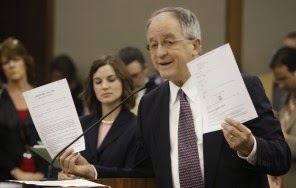 Speaking of Republicans who are a scourge on decency, here in Virginia, no one is more anti-gay and opposed to modernity and equality for all citizens than Del. Bob Marshall.  Marshall has been a blight on Virginia's reputation for years and can be relied upon to back every racist and reactionary cause favored by the Virginia GOP.  Indeed, Marshall is usually leading the Virginia GOP effort to return to the 1950's.  Marshall - along with the rest of the House of Delegates - is up for re-election this year and his anti-gay batshitery and support for Indiana's license to discriminate law is rightly becoming an issue in his re-election campaign.  Marshall needs to be defeated and sent into permanent retirement.  The Washington Post looks at how events in Indiana are becoming an issue in Marshall's re-election effort (NOTE: like every good Christofascists, Marshall is lying when he says the Indiana statute is no different than Virginia's statute):

The national firestorm over an Indiana law that some say legalizes discrimination against gay and lesbian people has spilled over into a Virginia House of Delegates race.

Del. Robert G. Marshall (R-Prince William) is defending the Indiana law, to the chagrin of his Democratic challenger, Don Shaw, who called the effort “offensive.”

“Virginia has the same law. We passed it in 2007. The sky did not fall!” Marshall wrote in a letter to the Indianapolis Star.

Marshall wrote the letter in response to one that Gov. Terry McAuliffe (D) wrote to the newspaper imploring Indiana businesses to consider relocating to Virginia for its “open, inclusive and thriving business environment.”

Shaw and the governor’s office said there are significant differences between Virginia’s law — and similar ones in other states — and the law under scrutiny in Indiana.

They say Indiana’s law was designed to give private companies legal cover for discrimination against gay and lesbian people, while Virginia’s law seeks to protect an individual’s freedom of religion from government intrusion.

Shaw said he is running in part to support laws protecting his 23-year-old son, who is openly gay.  “Bob Marshall wants to basically allow people to discriminate against my son and I don’t think that’s right,” he said. “I want to live in a robust and thriving Virginia economy and I believe Bob Marshall is doing everything he can do to prevent that.”

During the recent legislative session, Marshall introduced two bills that Shaw said mirror the Indiana law.  One would have blocked McAuliffe from making nondiscrimination against people because of their sexual orientation a condition of entering into a government contract. The other said anyone who gets a license or authority from the state would not have to serve or counsel same-sex couples if he or she has moral or religious objections.

Marshall, one of the most conservative members of the Virginia House, was the author of Virginia’s now defunct 2006 ban on same-sex marriage.

Businesses in Marshall's district need to make it clear that Marshall is a liability to economic growth and prosperity and that he must be defeated in November.

MAKE A DONATION TO SHAW'S CAMPAIGN HERE.
Posted by Michael-in-Norfolk at Thursday, April 02, 2015