American Exceptionalism is a Lie 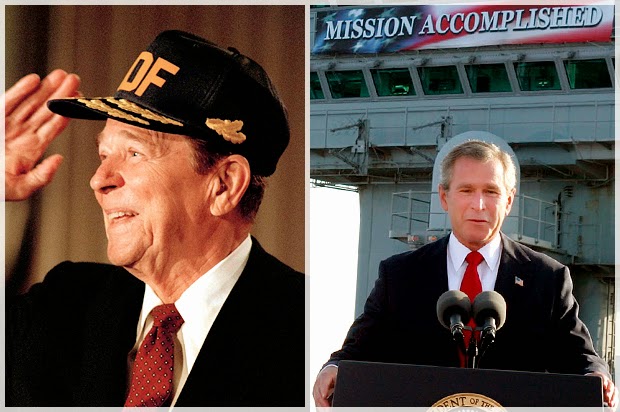 Fifty years ago America's disaster in Vietnam began to accelerate in earnest.  Locally, as one might expect in an area with a huge military population, the local newspaper has begun running some commemorative articles on the misadventure in Vietnam and to date the stories only put a positive spin on the story.   Sadly, it is part of the myth of American exceptionalism that keeps too many Americans from being honest about the many truly ugly aspects of the nation's history.  America has not always been the guy in the white hat out of some western movie.  Indeed, there are times that America is the bad guy - not that one would ever hear such an admission from xenophobic "patriots."  A piece in Salon looks at the need for Americans to be honest about the past so that future misdeeds can perhaps be avoided.  Here are highlights:

“I didn’t know there was a bad war,” George Evans recalled. . . .  there was one thing George trusted completely—his nation’s military power and the good that it did. With all his heart he believed the United States was on the side of justice and freedom and all our wars were noble.Despite personal hardships, you could always count on Americans to be the good guys, and always victorious. It was simply unimaginable that the United States might betray that faith. “I was raised in a family and neighborhood of extreme patriots,” George explains.

But George’s faith in America’s global goodness was forever destroyed in Vietnam, where he served as an air force medic. “I realized that the country I was from was not the country I thought it was.” One day at the hospital in Cam Ranh Bay he was ordered to clean the bodies of two young Vietnamese boys. They were dead.  . . . . George later learned that the boys were hit by an American military truck driver who may have been competing with other drivers over “who could hit a kid. They had some disgusting name for it, something like ‘gook hockey.’ ”

With the possible exception of the Civil War, no event in U. S. history has demanded more soul-searching than the war in Vietnam. The false pretexts used to justify our intervention, the indiscriminate brutality of our warfare, the stubborn refusal of elected leaders to withdraw despite public opposition, and the stunning failure to achieve our stated objectives—these harrowing realities provoked a profound national identity crisis, an American reckoning. The war made citizens ask fundamental questions:

The Vietnam War still matters because the crucial questions it raised remain with us today: Should we continue to seek global military superiority? Can we use our power justly? Can we successfully intervene in distant lands to crush insurgencies (or support them), establish order, and promote democracy? What degree of sacrifice will the public bear and who among us should bear it? Is it possible for American citizens and their elected representatives to change our nation’s foreign policy or is it permanently controlled by an imperial presidency and an unaccountable military-industrial complex?

My main argument is that the Vietnam War shattered the central tenet of American national identity—the broad faith that the United States is a unique force for good in the world, superior not only in its military and economic power, but in the quality of its government and institutions, the character and morality of its people, and its way of life. A common term for this belief is “American exceptionalism.”

[T]he faith in American exceptionalism has hardly disappeared. Countless times since the Vietnam War our presidents have invoked it in support of wars and interventions around the world. Although the public has been more reluctant to use military force than its leaders, there is still substantial support for the idea that our power is benign and that America remains a singularly admirable nation. That’s why virtually everyone who runs for higher office in the United States pledges allegiance to the creed.Yet even many ardent believers understand that the faith is no longer as broad or assured as it was before the Vietnam War.

When it finally ended in 1975, 58,000 Americans had died, and three million Vietnamese.  . . . . many others believed the war exposed American exceptionalism as a dangerous myth.

[T]he broad acceptance of Cold War policies was bolstered by the era’s equally broad religiosity. The idea that the United States was engaged in a godly crusade against atheistic Communism was not an extreme position in the 1950s, but part of everyday discourse.

It was still unimaginable to most Americans that their own nation would wage aggressive war and justify it with unfounded claims, that it would support antidemocratic governments reviled by their own people, and that American troops would be sent to fight in countries where they were widely regarded not as liberators, but as imperialist invaders.

By 1971, 58 percent of Americans had concluded that the war in Vietnam was not just a mistake, but immoral. More than at any time in our past, broad sections of the public, cutting across lines of class, gender, race, and religion, rejected the claim that American military power was an invincible force for good. Many concluded that the United States was as capable of wrongdoing as any nation or people, if not more so. And by 1973, when the final U. S. troops were withdrawn from Vietnam, only a quarter of Americans still trusted the government to do the right thing.

For the political right, defeat in Vietnam was an intense motivator. Conservatives were determined to rebuild everything they thought the war had destroyed—American power, pride, prestige, and patriotism. Above all, they wanted to resuscitate a faith in American supremacy. Their restoration project was a key factor in the rightward movement of American culture and politics in the decades after Vietnam. It depended, in part, on efforts to redefine the political and moral meanings of the Vietnam War. Ronald Reagan was elected president in 1980 saying Vietnam had been a “noble cause”—a war that should have been fought and could have been won.. . . .a new mainstream consensus emerged around the idea that the Vietnam War had primarily been an American tragedy that had badly wounded and divided the nation.

The attacks of 9/11 decisively destroyed the cautionary lessons of the Vietnam War, at least among the tiny group of people who formulated American foreign policy. George W. Bush launched a “Global War on Terror” premised on the idea that the United States was an exemplar of all that was good in the world fighting against all that was evil. He started two wars that led to protracted occupations and provoked bloody anti-American insurgencies.

If the legacy of the Vietnam War is to offer any guidance, we need to complete the moral and political reckoning it awakened. And if our nation’s future is to be less militarized, our empire of foreign military bases scaled back, and our pattern of endless military interventions ended, a necessary first step is to reject—fully and finally—the stubborn insistence that our nation has been a unique and unrivaled force for good in the world. Only an honest accounting of our history will allow us to chart a new path in the world. The past is always speaking to us, if we only listen.

Today's Republican Party is striving to maintain the myth and, worse yet, fanning the flames of racism, bigotry, and religiosity that helped create the Vietnam - and Iraq - nightmare.  One can only hope Americans will open their eyes to the lie.
Posted by Michael-in-Norfolk at Monday, March 30, 2015