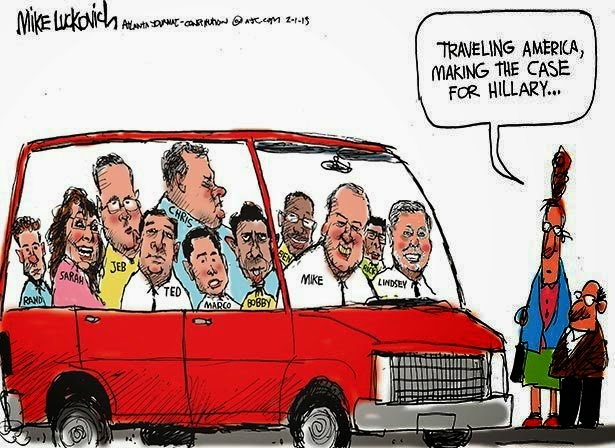 Many in the Republican Party had hoped that the 2016 presidential campaigns and elections could skirt the culture wars and thereby avoid divisive social issues that, outside of the lunatic Christofascist base of the GOP, typically cost Republicans votes in the general election.  Thanks to Mike Pence and Indiana - and now the Arkansas GOP - that hope is likely shot to Hell and would be Republican presidential candidates are being dragged into the culture war fray.  Some like the always despicable Mike Huckabee and Rick Santorum welcome it, others realize that they are in a catch 22: they must court the Christofascists to win the nomination, yet by doing so, they decrease their chances on election day in November 2016.  A piece in the Washington Post looks ate what's happening.  Here are highlights (I wish the Post would drop the "social conservatives" label and call these people what they are: bigots and religious extremists):

The national debate over an Indiana religious-liberties law seen as anti-gay has drawn the entire field of Republican presidential contenders into the divisive culture wars, which badly damaged Mitt Romney in 2012 and which GOP leaders eagerly sought to avoid in the 2016 race.

Most top Republican presidential hopefuls this week have moved in lock step, and without pause, to support Indiana Gov. Mike Pence (R) and his Religious Freedom Restoration Act, which has prompted protests and national calls for boycotts by major corporations.

In Arkansas on Tuesday, Republican legislators approved a similar measure that Gov. Asa Hutchinson (R) is expected to sign. The action prompted the chief executive of Arkansas-based Walmart to ask Hutchinson to veto the bill . . .

The agreement among the likely GOP candidates illustrates the enduring power of social conservatives in early-voting states such as Iowa and South Carolina, which will help determine who emerges as the party’s nominee next year.

But the position puts the Republican field out of step with a growing national consensus on gay rights, handing Hillary Rodham Clinton and other Democrats a way to portray Republicans as intolerant and insensitive. Some Republicans also fear that Indiana is only the first in a series of brush fires that could engulf the party as it struggles to adapt to the nation’s rapidly changing demographics and social mores.

“This is another case where the Iowa caucus beckons,” veteran GOP strategist John Weaver said. “Politically, it’s a difficult issue for a general election. After watching the Romney campaign in 2012, a lot of people said, ‘Do no harm to your general-election chances while trying to win the nomination.’ Having said that, you have to win the nomination first.”

As Steve Deace, a conservative talk-radio host in Iowa, put it: “This is the first litmus test of the race. Everyone in the party is watching to see how the candidates respond. For evangelicals, this is the fundamental front of culture issues.”

Vin Weber, a former congressman and Bush ally, said he is concerned about the general-election implications and whether the Indiana debate damages the Republican brand with moderate and independent voters. “Everyone likes Mike Pence, and they’re concerned about the primary politics of the marriage issue, but I’m a little worried they’re not thinking of the broader perceptions of the party,” he said.

But other Republican strategists argued that the Indiana imbroglio could have the opposite effect. They suggested that the harsh reaction to the law has become a rallying cry for the tens of millions of evangelical voters.

After Pence’s rocky appearance Sunday on ABC’s “This Week,” Christian conservative leaders around the country organized a frantic outreach effort to pressure likely candidates to defend the legislation, according to several people who spoke on the condition of anonymity to discuss private communications.

Personally, I think the size of the so-called evangelical vote is over estimated.  Moreover, seeing what the GOP is doing to gays reminds Hispanics and other minorities - and many women - that the GOP likewise has no use for them and, if allowed to do so, would trample on their rights as well.  Aging, far right white bigots is not the face of the GOP that will win in November 2016.  I hope the Christofascists - the GOP's own self-created Frankenstein monster - will lead the GOP to yet another defeat in November 2016.  I suspect Hillary s smiling to herself as she watches this circus of spittle flecked bigotry.
Posted by Michael-in-Norfolk at Wednesday, April 01, 2015

Unfortunately this came too soon. If this would have broken in Mar/Apr of 2016 forcing running candidates to respond to it, there would have been more of on impact in the presidential race.