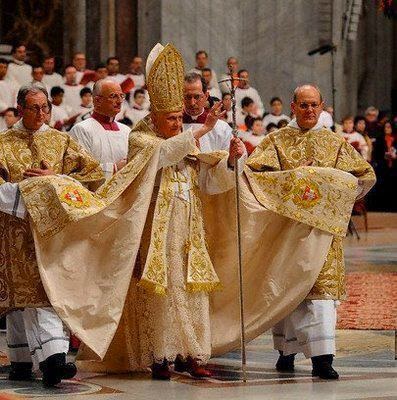 Besides waffling on bringing real change to the Roman Catholic Church's 13th century dogma on issues of sexuality and gender equality, Pope Francis is now facing questions about his seriousness in pushing through meaningful reforms to squelch rampant sexual abuse by priests - and cover ups by members of the hierarchy.  The catalyst for the questions?  The controversial the appointment of Juan Barros as bishop of Osorno, Chile.  The International Business Times looks at the controversy around Barros.  Here are highlights:

Criticism of the Catholic Church’s effort to promote accountability on clergy sex abuse is poised to intensify as the Vatican stands by its decision to back a controversial Chilean bishop who has been linked to an alleged cover-up of child abuse. The controversy over the appointment of Juan Barros as bishop of Osorno is raising doubts about the pace of reforms promised by Pope Francis, who has made a zero tolerance approach to clergy sex abuse a cornerstone of his papacy.


A spokesperson for the Holy See announced Tuesday that the Church’s Congregation of Bishops had "carefully examined the prelate's candidature and did not find objective reasons to preclude the appointment," in the Vatican’s first official comment on the divisive case. The news comes amid a growing controversy over the bishop’s appointment in Chile, where protests broke out last week during his installation ceremony at the cathedral of the southern city of Osorno. About 3,000 people gathered to protest Barros on Saturday, demanding that he resign his post.

The outrage stems from Barros’ connection to one of Chile’s most notorious pedophile priests, Father Fernando Karadima, who was found guilty of abusing teenage boys over the years in a 2011 Vatican investigation. Critics allege that Barros was not only aware of the abuse but also helped to cover it up in his capacity as Karadima’s protégé.


Catholic clergy in Chile have voiced their opposition to Barros’ installation, with one of the most vocal critics, Father Alex Vigueras of Santiago’s Congregation of the Sacred Heart, saying the appointment was “not attuned with the zero tolerance [policy on pedophilia] that is trying to be installed in the church,” the Guardian reported.

Barros’ appointment is making waves beyond Chile, too. Several members of Pope Francis’ sex abuse advisory board, known as the Pontifical Commission for the Protection of Minors, have expressed their concerns about his decision to appoint the bishop despite the allegations.

The reaction from members of the commission and from within Chile shows that the appointment was not a prudent decision by the Vatican, said the Rev. James Bretzke, a professor of moral theology at Boston College. “I believe it is sending the wrong message. The fact that [Barros] was named shows a certain tone deafness or lack of sensitivity even today among people involved in these decision-making processes.”

Some things seemingly never change within the Church hierarchy.  Real change will only come when rank and file Catholics walk away and take their financial support with them.  If that were to happen on a large scale, I suspect we'd see real change if the Catholic Church doesn't want to become an African church that preys on the poor and ignorant.
Posted by Michael-in-Norfolk at Wednesday, April 01, 2015