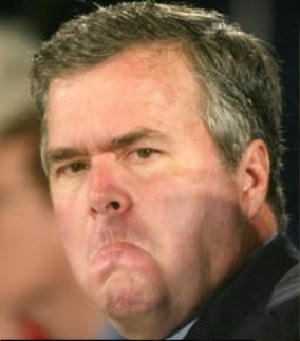 Those who thought that Jeb Bush would take moderate stances on LGBT issues are finding that such thoughts were truly delusional.  In an effort to totally prostitute himself to the Christofascists in the GOP base, Bush has praised Indian's falsely named Religious Freedom Restoration Act and given kudos to GOP Governor Mike Pence for signing the bill into law.  Meanwhile, those who truly value religious freedom are condemning Indiana and the Indianapolis Star is calling for prompt passage of LGBT non-discrimination protections to stop the economic firestorm over taking the state in the wake of the passage of the license to discriminate law.   The Daily Caller looks at Bush's endorsement of bigotry and division and attempt to compare Indiana's law to laws from which it differs greatly.  Here are highlights:

In a Monday interview, former Florida Gov. Jeb Bush stood by Indiana Gov. Mike Pence in the midst of backlash against the recent religious freedom law passed in the Hoosier State.

Appearing on “The Hugh Hewitt Show” Monday afternoon, Bush told Hewitt that Pence “has done the right thing” by passing the law, which he said mirrors the one passed by former President Bill Clinton in 1993.

“There are many cases where people acting on their conscience have been castigated by the government. And this law simply says the government has to have a level of burden to be able to establish that there’s been some kind of discrimination,” Bush told Hewitt. “We’re going to need this.”

“This is really an important value for our country to — in a diverse country, where you can respect and be tolerant of people’s lifestyles but allow for people of faith to be able to exercise theirs,” Bush added.

No more Bush family members in the White House!
Posted by Michael-in-Norfolk at Tuesday, March 31, 2015